What is this, you ask? 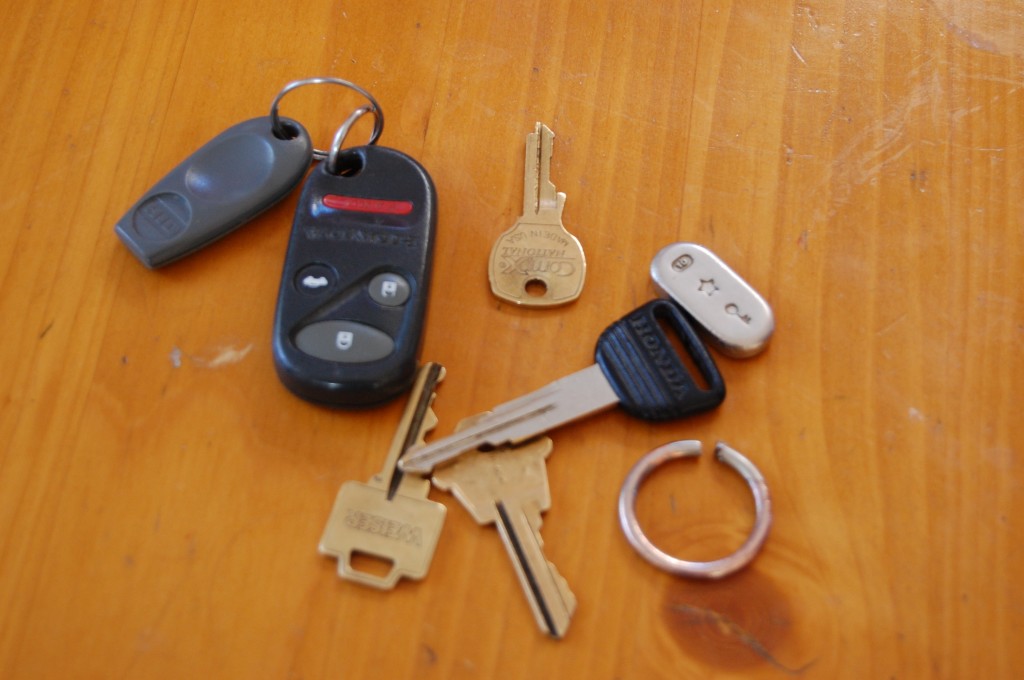 This, my friends, is my terrible shattering disappointment. I know it looks like a simple broken key ring, but let me explain:

This key ring is the one I got years ago at Weight Watchers when I lost a very cool amount of weight and was feeling a little cocky about myself. I was ordering new clothes, weighing myself every day, wearing crazy new hairstyles (…well, okay, not that last part. I never wear crazy hairstyles. I’m very boring about that.). But I was wearing new clothing styles! I even started wearing these cute little camisoles that I never wore before. END_OF_DOCUMENT_TOKEN_TO_BE_REPLACED

Is this the cutest bracelet you ever did see?

It’s made from actual recycled typewriter keys, each with a smooth silver backing. I got this particular one from JuNxtaposition. The woman who makes them there is named Jeanne, and she’s quite lovely — she e-mailed me to let me know the particular bracelet I wanted was no longer available, but she would be very accommodating about a new one. You can scroll through her site and order a very specific bracelet — seeing the exact letters, colors, or symbols you’ll receive. I ordered a couple of them at Christmas and was in a bit of a hurry to have them shipped, so I couldn’t custom-order, but that option is available, too.

I just think it’s a darling gift for any woman in your life who is a writer. Or who ever used a typewriter. Or who loves antiques. Or loves bracelets. Or all of the above. (That would be me!)

Now I’m going to go put on my favorite Christmas gift to myself. …

Guess what? I’m starting another blog!

Yeah, I know — This blogging thing is getting out of hand. I’m blogging all over the place, and getting very little other writing done. And I’m trying to write two novels, and find an agent, a raise a family, and have an actual full-time job. …

But I really, really like it. And I just want one more. …

Anyway, the new blog is going to be a bit more professional — just me giving actual, usable advice. This Mizwrite blog, meanwhile, will be my “main blog” — where I come to chat, and whine, and ask you guys questions, and check in to see what you’re up to. It’s my first love, afterall. …

So I’ll let you guess what the other blog will be — any ideas? One hint: It’s what I was doing here.

Here are a couple of videos and pictures of the Jan. 23rd Downtown Disney “Freeze.”

Similar to the one in Grand Central Station awhile ago, about 1,000 participants were involved — all “freezing” time at the same moment, and holding their pose for five minutes (while everyone around them stared, bewildered), then “resuming” their action five minutes later. Saturday’s event at Downtown Disney was organized by the Random Acts of Theater group.

My son and his friends found out about it on Facebook — word spread quickly about the 3:00 event (later changed to 4:00), so he and several classmates decided to meet the group and join in the fun.

Here’s a YouTube video of the entire event. This video starts off showing a practice that was held in a Disney parking garage, then the actual event — out on the sidewalks of Downtown Disney — takes place at 5 minutes :12 seconds on the video. Hang in until the end if you can — at the end, it shows everyone just “resuming.” A lot of people clapped. It was really cute:

And here’s another video that I managed to get in! I’m looking like a complete dork. Nathan is in the blue shirt and comes into the frame at about 3:27, then I follow behind him at 3:29. Rene found this video on YouTube and was watching it the next day, then suddenly said, “Mom! You’re in here!” She was so excited. I’m wearing a black jacket and holding my camera and looking really goofy (er …. uh … Goofy?). We were actually looking around for Rene, who was with us, but we couldn’t find her. I wanted to find her so we could wander further down and see if we could find my son in his “pose” with all his friends. I look like I’m lost, or something. Silliness.

Anyway, then you see me wandering over to the side of the screen at about 4:48 to take a picture. Here’s the picture I took: 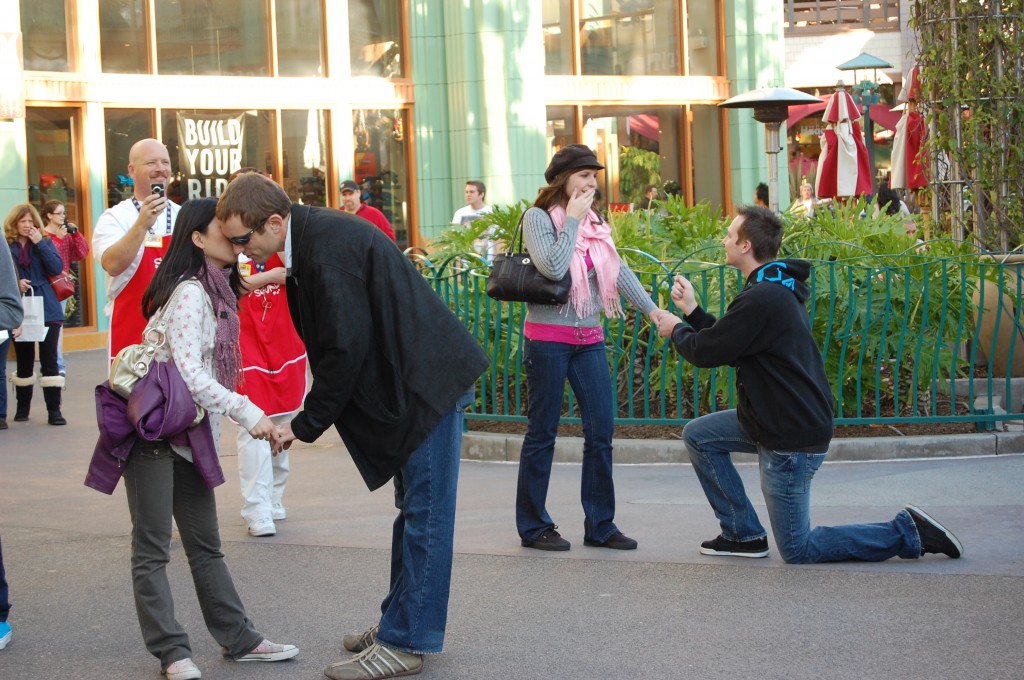 These guys were really good. I loved their poses — the one couple in a “proposal” pose, and the other couple in a cute “tell me a secret” pose. They did an excellent job staying “frozen.” A lot of people came right up to their faces and took pictures of them.

After it was all over, I did run into my son and all his friends. They had a ball doing this. My son and his girlfriend did a pose where she had something in her teeth, and he was doing the “dutiful boyfriend holding the purse” pose. They recreated it for me here:

And here’s the whole gang, hanging out afterward and just looking cute: 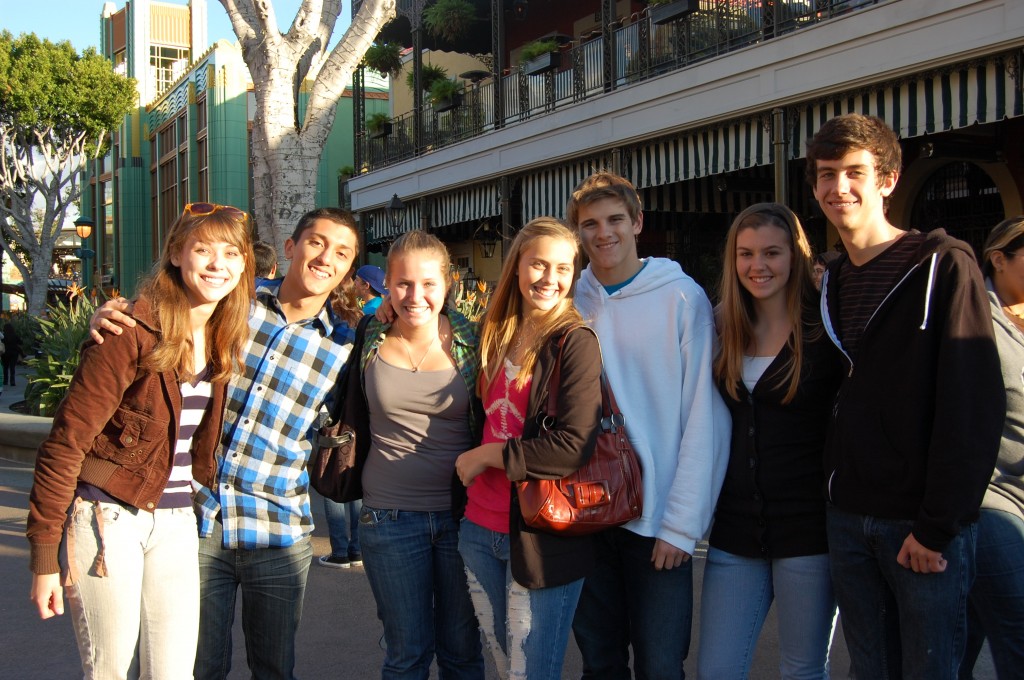 They said they had a great time. It was good, harmless fun. And kind of an interesting look at group planning. (I mean, wow, 1,000 people?) My son’s friends said two things really stood out: how quiet it got (it really did — kind of eerie), and how people would walk right up to them and take pictures about 12 inches away, like they were really statues.

Have you ever seen one of the “freezes”? Did you see the one at Downtown Disney? If so, what did you think? 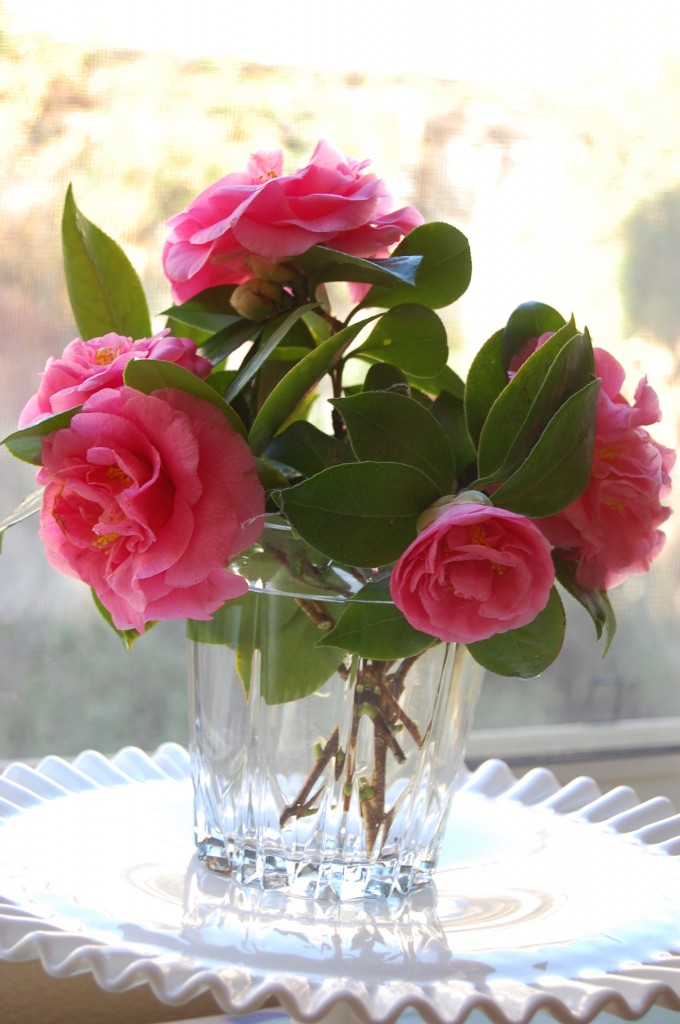 But they’re really cheering us up in all this wet weather we’ve been having.

(This was taken before the downpour began.)

Hope you have a lovely Friday!