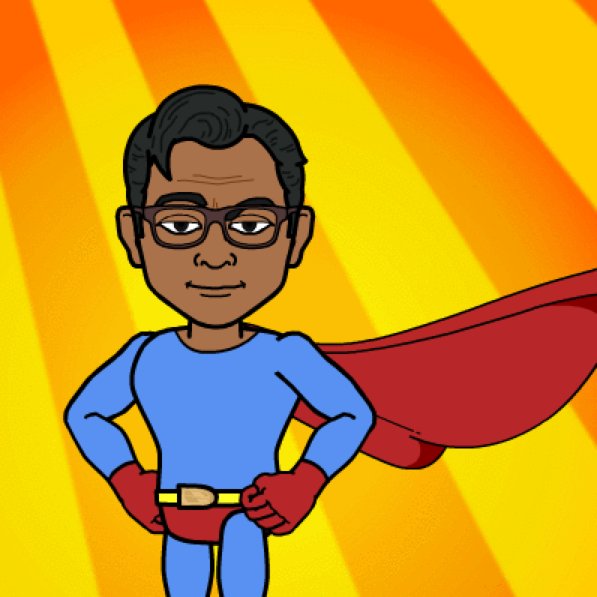 Many people scoff at romance novels (and romance novelists) and say they create unrealistic views of love and men.

But you know what?

I don’t think we do.

Sure, romance writers idealize/ romanticize many settings, scenes and lines of dialogue – what novelist doesn’t? – but I don’t think I’m coming out of left field with the fact that there are many, many good men out there who love unconditionally and truly, and who know how to love well.

Case in point – my husband.

I’ve always called him “Superman” on this blog, since I started it in 2009, (and here’s why), but he’s raised the bar considerably in recent months as he’s come to my rescue during cancer.

They’re truly out there. 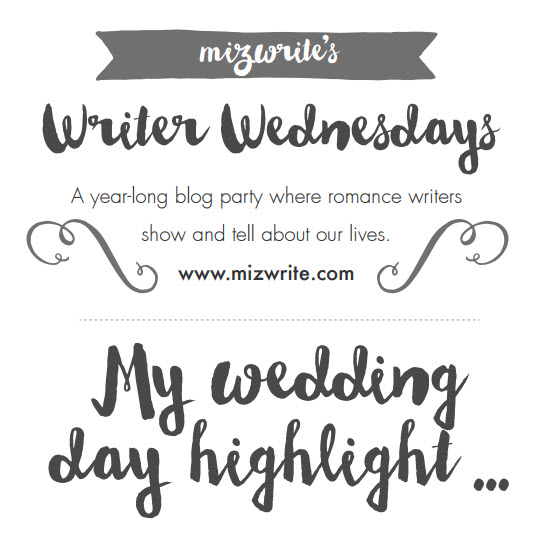 We’re starting a new thing! I’ve begun a romance-writer blog party where, once a month, my writer friends and I will all be blogging on the same topic on the same day — we’ll be talking about things all romance writers love to talk about: reading, writing, and romantic things!

Our first one is about our wedding day highlights.

We picked this topic because our friend Kat Cantrell has TWO books coming out at Harlequin this month, both involving weddings: From Ex to Eternity and From Fake to Forever. You can see them at the bottom of this post, plus check Kat out here.

And now … Here we go: My wedding day highlight. …

Here’s us on our wedding day: 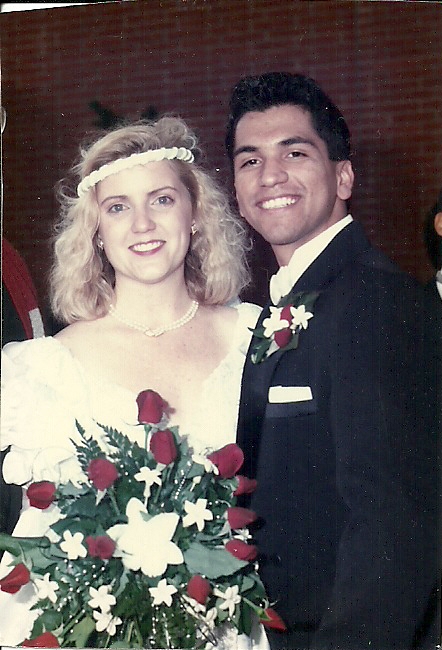 Dang, we were young. I had a beautiful wedding day. I really did. We got married in November because I love the cool crisp air in November and the normally sunny days. It was Thanksgiving weekend, 1989, and kind of the cusp of the holidays. Our colors were black and red, and everything looked gorgeous and holidayish. But the highlights of my wedding day — wouldn’t you know — were things you can’t plan at all. The highlights were things people said, a dance with someone special, my guests getting along in a “worlds colliding” way. Plus there was this guy: 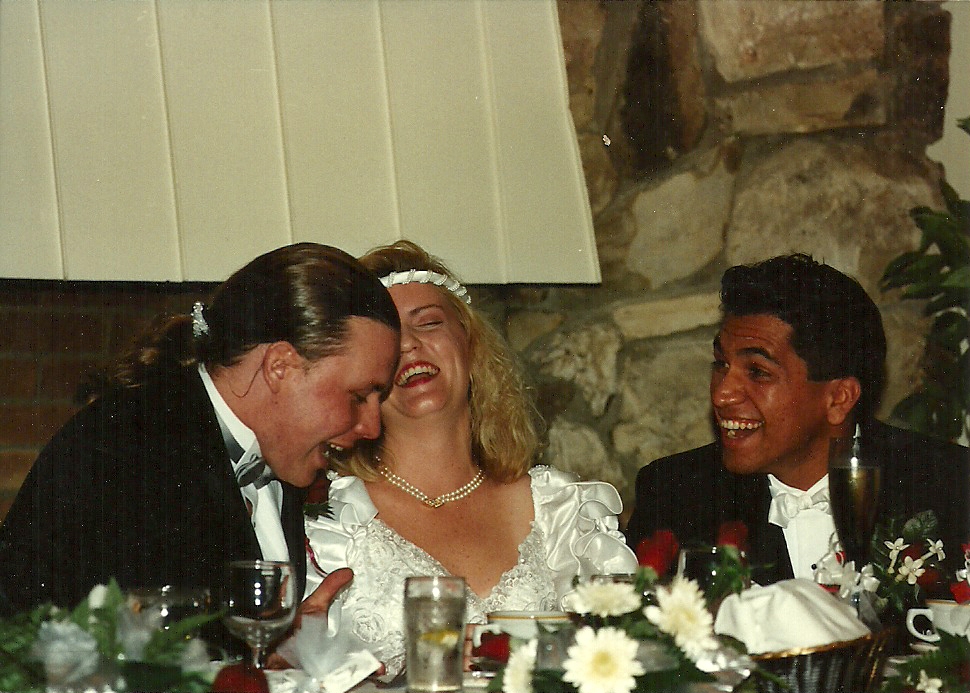 J.R. Taylor was the best man in our wedding, and — like in the photo above — he was cracking us up all day.

He was Chris’ best friend. He’d flown in from Montana, where he’d been living after finishing his stint in the army as a paratrooper with the 82nd Airborne. At the wedding, he brought a flask for Chris to calm his nerves (a spirit they’d enjoyed as buds in the past), gave a great toast, danced with the prettiest girls, and just all-around had a great time.

At the end of the wedding, we had done a crazy complicated car-switch because my dad had ordered us a surprise limo (Yay, Dad!) from the church to the reception. So some of us were without cars at the end of the night. And J.R. didn’t have a way home from the reception, and he’d come alone. So somehow we offered to give him a ride. Yep, in our “getaway car” with the windows all decorated “Just Married!” Problem was, Chris and J.R. were smashed by the end of the reception. And I hadn’t drunk at all. So I was voted the designated driver.

So … yes, me in my full-skirted gown and my ’80s headband veil, driving the getaway car out of the reception at 2 a.m. with what looked like TWO grooms. …

And then as we started driving, my two drunkards started complaining that they were “huuuuuungry, Laurie, huuuuuuungry,” and they wanted to go to In-N-Out. So I laughed and pulled into the one in our home town. Which is like the ONLY In-N-Out in Southern California that isn’t a drive-through (because of an old no-drive-through rule in Placentia).

So the three of us piled out of the car and walked in and ordered hamburgers — the bride (yep, still with her veil on!), and “two grooms”! We got a lot of attention at In-N-Out. But we had so much fun. And that will forever be my wedding day highlight.

(Want to read more about J.R.? I wrote a post about him here.)

Want to see what all my writer friends wrote about their wedding day highlights? Here are the participants. All of us are Golden Heart 2012 Firebirds. You can click on their names to go to their blogs and read:

Come back every month for our Writer Wednesdays! Here’s what’s in store: 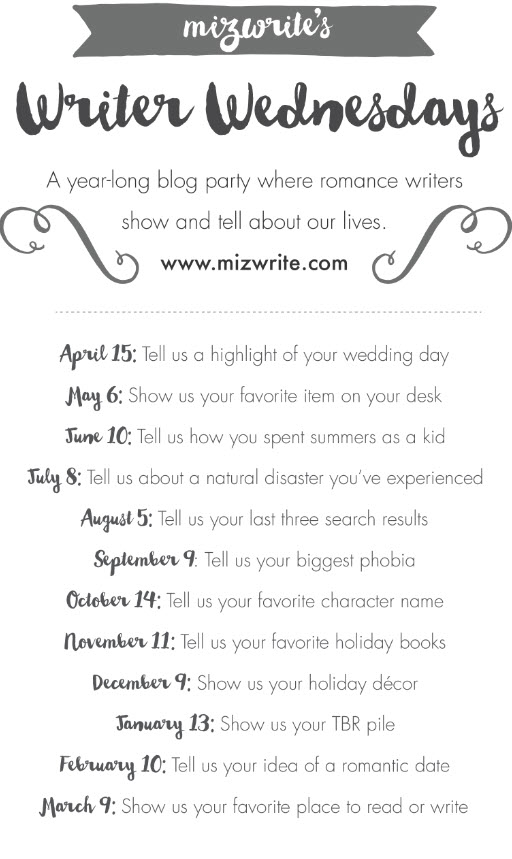 And here are Kat Cantrell’s wedding books from Harlequin this month! Kat’s one of the Firebirds, and a great writer! 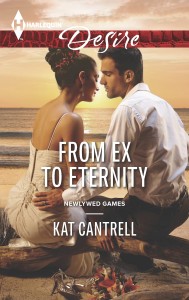 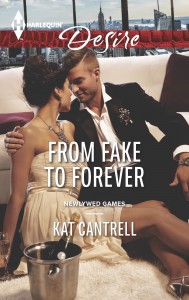 So I had my 30th high school reunion last weekend. I’ve been kind of trying to process it this entire week and figure out why everything about it surprised me so much.

Let me count the ways…

Surprise 2: That we needed nametags already. Maybe it’s because I’m still in denial that 30 years have passed, but I thought there might be one or two people I didn’t recognize. But no. There was a roomful of people I didn’t recognize. Thirty years is a long time. And I wasn’t the only one who had this problem. For the entire first hour, we were all whispering to each other, “Who’s that?” Then, when we’d hear the name, we’d say, “Ohhhhhh!” and go over and say hello. Generally, the guys were less recognizable than the gals. But a tip for anyone else going to a 30-year reunion: Suggest nametags! It’s not too early.

Surprise 3: That my hubby had a good time. Superman and I were in the same graduating class, so he was in this boat with me. But, unlike me, he had no desire to go to any high school reunion whatsoever. I wasn’t going to make him go, but all on his own one night a few weeks ago he said, OKAY, I’ll GO. (As if I had even brought it up right then.) So he came along, kind of dragging his feet. But he ended up having fun. He ran into folks he’d almost forgotten about, but had fun remembering random escapades with them, whether in football, band, after school, or whatever. When we left, he held my hand and looked at me sideways and said, “Don’t say ‘I told you so’.” So I didn’t. But I smiled.

Surprise 4: Most everyone was pleasantly past the judgy-phase. Not everyone, mind you. But most. I imagine this is where reunions start to get interesting. Everyone is moving into their 50s soon here. Almost everyone is reaching for their reader glasses. More than 70% of the class now has probably suffered real life and loss – some health problems, some deaths in the family, some job loss, some marriages failed, some financial setbacks. We’ve lost a couple of classmates by now. Some have lost parents or siblings that the rest of us knew. Some have had cancer and beat it. Someone’s lost a child. Many have divorced, married again, sometimes divorced again. Many are on their second or third career attempts by now. Everyone is starting to “get it” – we’re not here to judge. We’re here to embrace, say hello, have a drink, and pat the back of someone who’s been there, too.

Surprise 5: I always enjoy talking to the person I least expect. This is my second class reunion, and what I remembered most about the first one is that the conversations I most enjoyed, and most remembered afterward, were with people I didn’t even expect to see, and in some cases people I didn’t even know very well in high school. People interest me in general – it must be the writer in me – but at both reunions I tried to steer away from my closest friends (whom I still see regularly anyway) and strike up conversations with folks I knew but didn’t hang out with necessarily. And I found them all so interesting. Somehow, having new, adult shared experiences overlaid onto our shared past (growing up in the same era, in the same neighborhood, at the same school, with the same kids and teachers) makes an even cooler connection. It’s like you can understand the adult experiences better because you knew and shared the teenage experiences. And maybe there’s an assumptive trust there that you don’t really get with just any ol’ person you meet as an adult. And some of these folks were kids I went to elementary school with, too, so the shared experiences just multiply. It felt like touching a little bit of a cornerstone.

Maybe — despite everyone’s nervousness, vacillating, and uncertainty — we all just need to make these connections every so often.

Maybe there’s something important about touching that cornerstone.

My (now-almost-16-year-old) daughter found this picture in one of our photo boxes a little while ago, of her and her dad, and put it on her Facebook page entitled “Learning to make cakes.”

I just love her expression in this photo. It says it all, to me — how much all the kids adore their dad, and always have.