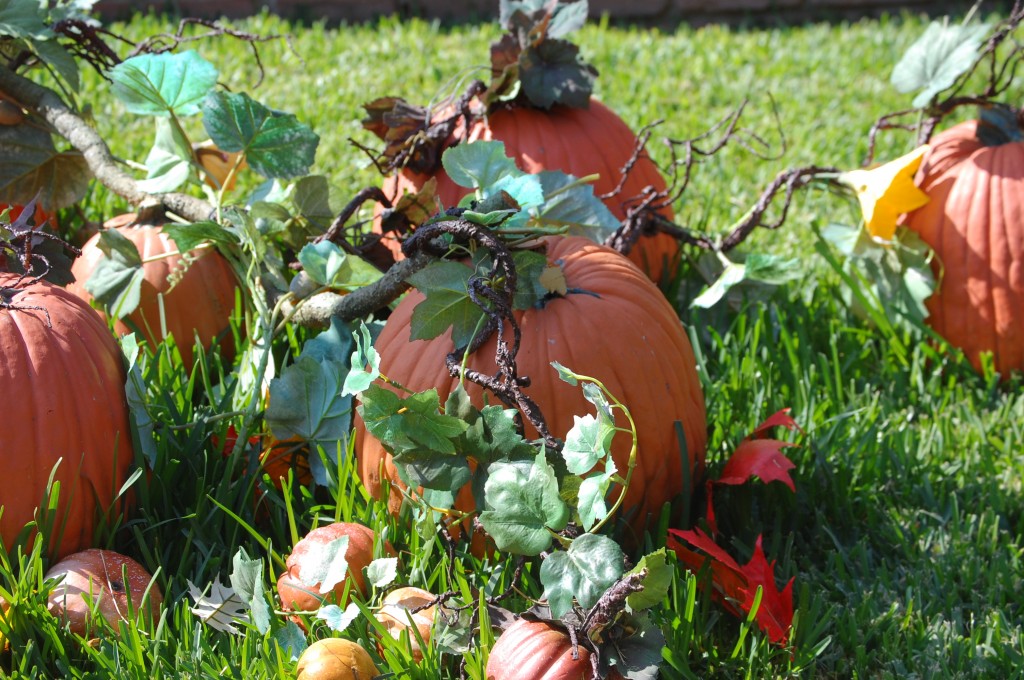 Along with loving candy corn, one of my favorite things about fall is pumpkin.

My coworker Nicole made a delicious “crunchy pumpkin pie” over the weekend, and she brought some in that I got to sample yesterday and it was reeeeeally good. She now has the recipe on her site here.

I also have really fond memories of an amazing pumpkin bread that former coworker from the Register, Kris, used to make in mini loaf pans and carry around to about 50 people on the floor. AMAZING. We used to look forward to it every year. It was wrapped in plastic wrap to keep in all the gooey goodness, and tasted like it was made with several sticks of butter, and she used to sheepishly warn us that it was fairly calorie-laden, but we really didn’t care. Truly AMAZING.

Me, I’m not much of a baker. But Nathan and I (he loves pumpkin as much as I do!! Yay! One child does!) always make it a tradition to go to Golden Spoon around this time every year to get pumpkin-flavored frozen yogurt with the graham cracker topping.

(I think I need to plan our visit soon!)

How about you? Do you have any excellent recipes for pumpkin anything? (Something even a non-baker like me can make?) : ) Or any restaurants you recommend that have a delicious pumpkin something?

So I’m trying to give up Diet Coke. This is not easy for me, since I drink about four or five a day … and have since I was a teenager. (egads!)

I need the morning one for the caffeine (or maybe the first two), and then the rest are sort of habit, really. To be honest, I don’t even really love the taste anymore. I think drinking them is a habit more than anything.

But lately, I’ve convinced myself that my health would be better if I stopped. I keep reading that Diet Coke (either the carbonation or the caffeine, or both) can contribute to tummy issues (which I have), heartburn (have that, too), and can even keep you from losing weight because of the weird number it’s doing to your cells. Not sure how much of that is true, but since all these health issues are with me anyway, I’m willing to experiment.

So … I started by eliminating all but the first two of the day, because those are my caffeine source (and giving up caffeine is a separate matter, as far as I’m concerned)!

Then I worked on minimizing those first two to wean myself off the caffeine: One day I did a glass and a half; one day a glass; then one-half a glass; then today I just took a sip to fool myself into thinking I had caffeine.

So I’m on my first official day with ZERO Diet Cokes. Wish me luck. … I’ll have to find a way to beat the incredible fatigue that hits me at 2:00, but first things first. …

This is Part 3 of the story of How I Met Superman. To get caught up,  you can read the preceding chapters here.

Patrick* and Superman actually traveled in the same circles. They had very little in common – and really, from what I can tell, didn’t like each other – but they shared about five close friends. For this reason, Superman and I were like stars in the same universe – circling each other, sharing orbits, but never actually bumping into one another. We knew all the same people, but never met, never talked. Of course, that didn’t stop me from memorizing all of the colors of his Izod shirts and the way they pressed against the mounds of his biceps.

Meanwhile, I tried to stay focused on simply not making Patrick mad, but I was starting to realize that maybe I wasn’t cut out for it. And maybe I just wasn’t made for the drama of being a couple. I’d only had one steady boyfriend before Patrick, who was outrageously sweet with me, but he and I had started out as friends that grew heatedly closer, and the relationship was really just like friendship with kissing.

But this thing with Patrick was wrought with angst. There were lots of suspicions. Lots of fights. Lots of tears and jealousy and late nights and arguing on the phone.

I guess I thought there was something inherently wrong with me, that I couldn’t seem to make this boy happy: Patrick had all that charm. Adults loved him. He was smart. He was an athlete. Why couldn’t I get along? Staying with him started to seem like a challenge. It was the only conceivable solution to what I saw as the alternative: failure. And I would sit on the brick planter and let Patrick say what he wanted. I tried to keep him from being mad. I tried not to cry. Eventually, though, people started to notice me shrinking into the background.

One of those who noticed my shrinking first was, interestingly, Patrick’s best friend. We’d all be hanging around in the quad at school, and I’d notice Keith* look up sharply at the way Patrick talked to me. Eventually, Keith began pulling me aside.

“You really shouldn’t let him talk to you like that,” he’d whisper.

I would frown – it sometimes just sounded like yet another criticism. “What am I supposed to say?” I’d snap.

“You deserve better,” he would say with finality.

But I didn’t really know how to go about that. I wasn’t equipped. I wasn’t confident enough. And I wanted romance – I didn’t want to fight. I wanted ballpoint-pen hearts drawn across my Pee-Chee folders, photos across my dresser top, dried corsages on my bedroom bulletin board. I kept thinking we’d cross some line, at some point, and the fights would be history. That I would finally do something right, or say the exact-right thing.

One day my closest childhood friend was coming to visit for the weekend from Newport Beach. She was going to meet Patrick for the first time, and I remember being excited to introduce them. Having an outsider’s opinion — someone who didn’t go to our school and have preconceived notions of him — seemed important all of a sudden.

Early on a Saturday morning, she and I walked to the local hoops to meet him, chatting all the way. Patrick met us there. He turned on the charm – big smile, witty jokes. We played basketball, and he let us play against him. It began growing dark, so he walked us home. As soon as I said goodnight to him and closed the door, I turned around and faced my friend in the hallway. I’m sure I had a hopeful expression on my face.

My jaw dropped. Mean to me? A whole day of basketball and charm and witty jokes, and that’s all she had to say? What about how cute he was? How funny he was? How –

“He says terrible things to you,” she interrupted my surprise. “You shouldn’t stay with him.”

She walked past me into the kitchen and started chatting with my mom, who was making us pot roast for dinner. I followed, stunned, but had to wait two excruciating hours through dinner until I could drag her up to my room and sit her down on the shag carpeting for ultimate girl talk. I pressed her for details. She calmly walked me back through the day, pointing out the comments he’d made, all the criticisms he’d thrown – things I’d begun to ignore. Much to my horror, I realized she was right. Had I really grown that oblivious? Had I really allowed myself to be treated so badly?

Unfortunately, the answers were yes and yes. It took me a long time to play along, but I finally started to believe what others were saying. I began to listen to Patrick more skeptically. I began to shake my head when he criticized. But it took a football game, and an actual introduction to Superman, to change things. …

Click here for Part 4: The Night that Changed Everything…

*Names changed to protect the Don’t-Want-To-Be-Googled.

The first five pages are of huge importance to a novel. Noah Lukeman even wrote about this in a how-to book called The First Five Pages, which I read (although I found it almost too basic. I guess I wanted something more).

The reason the first five pages are of such importance to writers is two-fold: for one, they’re important to your reader. Publishers say that readers often open a book in a book store, scan the first page or two, then make their buying decision. With Amazon, readers do the same thing with a click of a button, scanning the first few pages, then deciding if they like the style enough to read the whole thing.

But the first five pages are also of enormous importance when a writer is trying to sell a manuscript. END_OF_DOCUMENT_TOKEN_TO_BE_REPLACED

Whew! As soon as I posted this a couple of weeks ago, we had a nice Autumn heat wave where temps got to 113 degrees — the highest on record since 1877, apparently. And now we’re hitting another heat wave, although yesterday it only got to 91.

It reminded me of an article, though, I found from 1876 in San Francisco about a “heat wave” they had that year that was — gasp! — 95 degrees!

I found the article when I was researching my historical short story, and it made me laugh — both because 95 degrees doesn’t seem like an unusual heat wave at all to me, and because of the way this newspaper article was written. Here are a few highlights:

That yesterday was a hot day there is no manner of doubt, and it is hardly probable that anyone in San Francisco with any regard for the truth will deny it. … Our solid businessmen, who were compelled to be upon the streets, disregarded ceremony altogether and unbottoned coats and vests, and many threw aside altogether their coats, preferring not to sacrifice comfort to appearances. Every man on the street showed conclusively the overpowering influence of the heat, and marched up and down the streets with a limp handkerchief in his hand, which was constantly brought into requisition, mopping the perspiration which streamed from every pore. …