Here’s a question from avid reader and friend Barbara during The Red Bikini book club, which we had on Facebook in September:

Q: Who (or what composite of people) was the inspiration for Fin and his personality? – Barbara Y.

A: When I knew that Giselle’s hero would be a surfer, I wanted immediately to bust the stereotype of a surfer, so my first inspiration for Fin was … Kelly Slater.

Kelly Slater is a famous pro surfer (who is as famous now for being over 40 and still in the game as anything), but he’s also well-spoken, well respected, charitable, driven, ambitious, athletic, and not afraid to commit (has a long-time girlfriend), so I read a lot about him. (Click his name above for photos of him.)

But I also read a lot of articles in surf magazines about pro surfers who had interesting backgrounds (like traveling around with surfer parents, sleeping on the sand in various countries, spear-fishing for food, etc.) and drew upon some of those (real) stories also, wondering what kind of man that upbringing would produce. Most of the stories in Fin’s background were real stories.

Personality-wise, I knew Fin was a loner, so I drew upon the personalities of men I know who are like that. (They’re always impressed when you can get them to talk about themselves!)

Visually, I had a picture in my writing folder of Fin, which I would see every time I’d open my files to write. It was this picture of David Beckham. (What do you think? yes? no?): 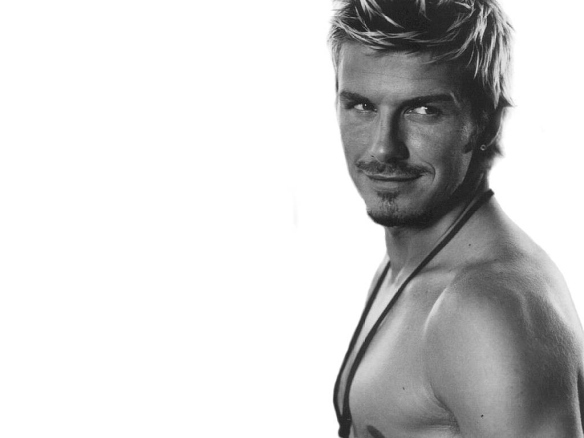 And each of my heroes has a little bit of my husband in him, so some of Fin’s sweet lines and Fin’s love for midcentury modern surf culture (his house, his furniture, his clothes) come straight from hubby!

Have a question? Send to laurenchristopher@live.com!