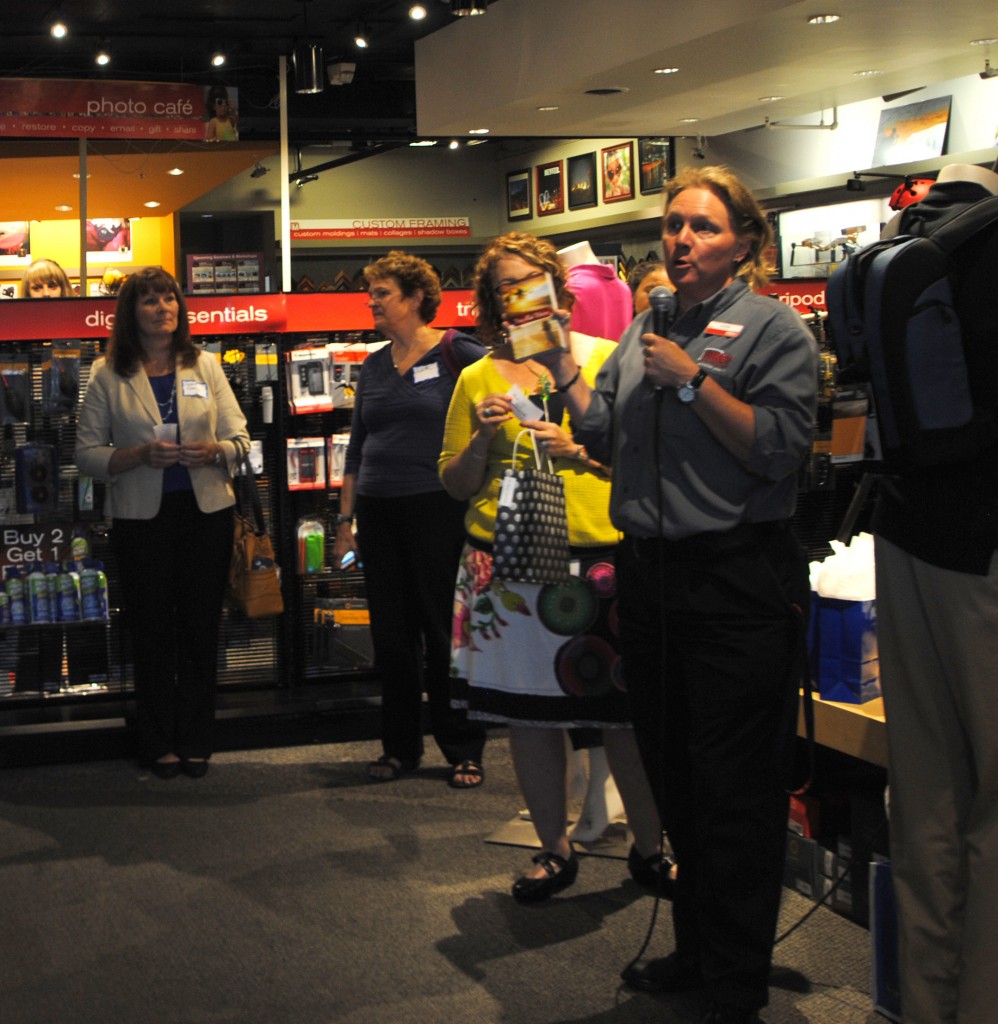 So a very-old-friend from elementary school, Jennifer Jones (yep, way back to first grade! We were in MGM together every year, played at each other’s houses, etc. and stayed friends through high school until she moved), found out about my book and ordered a few to give away in door-prize baskets at a Women’s Networking Event at her camera store in Denver, CO.

“So my store hosted a women’s networking event last night and 55 women who have never heard of you before now know who you are. … Attached is a photo of me explaining who you are to me and why I was supporting you. … You’re awesome and I’m so proud of you and I enjoy following your adventures on Facebook.”

So sweet! (Old friends are the best, aren’t they?)

I told her I’d return the favor when she published her first photography book. (Because she will! Super talented wildlife and landscape photographer, she is.)

I hope whoever won those prizes really liked the book, and I’m super honored to be part of a women’s networking event with a really strong woman like Jen. 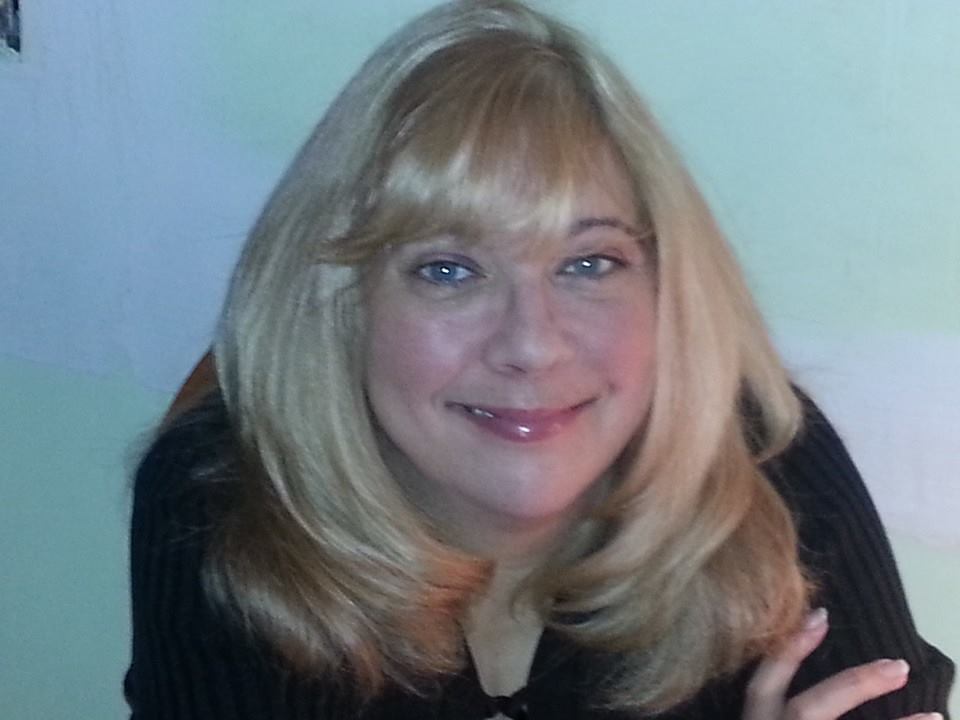 Critique partners (CPs) are uber-important to writers. While beta readers read your book like the general public will (looking at the “big picture,” the overall story, the pacing, etc.), critique partners are usually other writers, and they’ll look at the little writerly details for you. They know how to “arc a character,” how to write a “beat,” how to add emotion, how to close your “black moment” and other kinds of writer-jibber-jabber like that.

I met Patti (aka historical romance author Tricia Lynne) in an online critique group I was in in about 2006. She lives in Nebraska. We quickly hit it off, liked each other’s writing, kept up with each other, and finally broke away from the group because we were writing at a much faster pace and had waaaaaaaaaay more pages to critique than the others!

Eight years later, we’re still great friends and still swapping pages and helping each other out. She’s the best CP in the world, I’m absolutely sure. She’s amazing with writing “deep point of view” and descriptions. And she’s great at pulling the best descriptions out of me. (She’ll write in the margin, “But what does this look like? What does it smell like here? Are there palm trees or is it a clear view?” etc.)

She’s seen The Red Bikini through every iteration, and I think she was as excited as I was when it was finally published! She’s definitely the godmother of the book, and I opened my acknowledgments with her.

Next time: Meet my photographer!

This piece originally ran in my May newsletter. If you’d like to sign up for my newsletter, and get all the posts mailed directly to you, sign up here. We also do monthly giveaways and have “sneak peeks” at chapters from upcoming books. 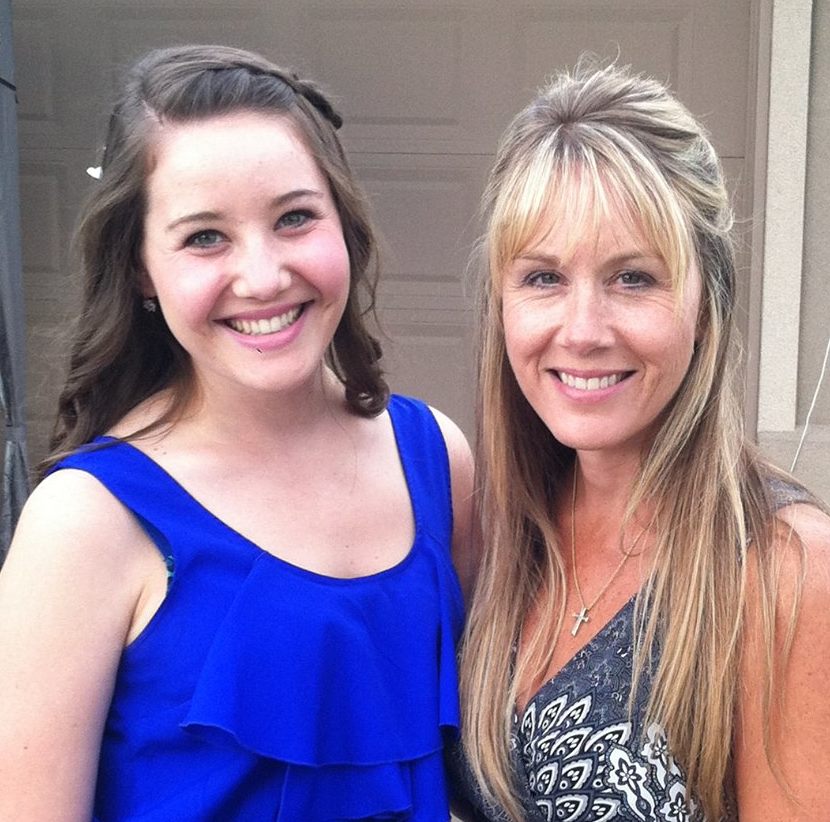 Debi (right) and her daughter, Justine

This piece originally ran in my April newsletter. If you’d like to sign up for my newsletter, and get all the posts mailed directly to you, sign up here. We also do monthly giveaways and have “sneak peeks” at chapters from upcoming books.

Although there’s nothing like the exaltation of finishing a book, it’s quickly followed by a panic … wondering if anyone will like it or not. To help me decide, I have a group of “beta readers” — readers who read the book in its development stage. Some of the betas have been with me for five or six years now, and they read my works in progress, then email me their gut-level reaction to help determine if I’ve conveyed the right feeling about each of the characters. (For The Red Bikini, I thanked all the TRB beta readers in acknowledgments — you can find all their names there. Good beta readers are worth their weight in gold, and I’m so very thankful I have such terrific ones.)

I met all my beta readers in different ways — some are old friends, some are new friends, a few I met randomly on Twitter when I put out a cold call in 2006 for someone to beta-read my manuscript! I’ve had various beta readers over the years, but five are true troupers who have been with me from the beginning and have read all three finished manuscripts.

This is Debi, one of my first betas, and she’s one of the “old friends.”

Debi and I were best friends way back in junior high. (She’s even a key player in my blog serial How I Met Superman!) We spent a wonderful, memorable summer riding bikes all over town, laying out by the pool, talking about boys, spending the night at each other’s houses, doing each other’s nails, and telling each other everything! She moved away in 9th grade, though, and we lost touch for some time. But we’ve reconnected in recent years and she’s become one of my earliest fans — and is probably my most faithful beta reader. I owe Debi a HUGE thanks for all her support and encouragement!

Next time: Meet my CP!

So I had my 30th high school reunion last weekend. I’ve been kind of trying to process it this entire week and figure out why everything about it surprised me so much.

Let me count the ways…

Surprise 2: That we needed nametags already. Maybe it’s because I’m still in denial that 30 years have passed, but I thought there might be one or two people I didn’t recognize. But no. There was a roomful of people I didn’t recognize. Thirty years is a long time. And I wasn’t the only one who had this problem. For the entire first hour, we were all whispering to each other, “Who’s that?” Then, when we’d hear the name, we’d say, “Ohhhhhh!” and go over and say hello. Generally, the guys were less recognizable than the gals. But a tip for anyone else going to a 30-year reunion: Suggest nametags! It’s not too early.

Surprise 3: That my hubby had a good time. Superman and I were in the same graduating class, so he was in this boat with me. But, unlike me, he had no desire to go to any high school reunion whatsoever. I wasn’t going to make him go, but all on his own one night a few weeks ago he said, OKAY, I’ll GO. (As if I had even brought it up right then.) So he came along, kind of dragging his feet. But he ended up having fun. He ran into folks he’d almost forgotten about, but had fun remembering random escapades with them, whether in football, band, after school, or whatever. When we left, he held my hand and looked at me sideways and said, “Don’t say ‘I told you so’.” So I didn’t. But I smiled.

Surprise 4: Most everyone was pleasantly past the judgy-phase. Not everyone, mind you. But most. I imagine this is where reunions start to get interesting. Everyone is moving into their 50s soon here. Almost everyone is reaching for their reader glasses. More than 70% of the class now has probably suffered real life and loss – some health problems, some deaths in the family, some job loss, some marriages failed, some financial setbacks. We’ve lost a couple of classmates by now. Some have lost parents or siblings that the rest of us knew. Some have had cancer and beat it. Someone’s lost a child. Many have divorced, married again, sometimes divorced again. Many are on their second or third career attempts by now. Everyone is starting to “get it” – we’re not here to judge. We’re here to embrace, say hello, have a drink, and pat the back of someone who’s been there, too.

Surprise 5: I always enjoy talking to the person I least expect. This is my second class reunion, and what I remembered most about the first one is that the conversations I most enjoyed, and most remembered afterward, were with people I didn’t even expect to see, and in some cases people I didn’t even know very well in high school. People interest me in general – it must be the writer in me – but at both reunions I tried to steer away from my closest friends (whom I still see regularly anyway) and strike up conversations with folks I knew but didn’t hang out with necessarily. And I found them all so interesting. Somehow, having new, adult shared experiences overlaid onto our shared past (growing up in the same era, in the same neighborhood, at the same school, with the same kids and teachers) makes an even cooler connection. It’s like you can understand the adult experiences better because you knew and shared the teenage experiences. And maybe there’s an assumptive trust there that you don’t really get with just any ol’ person you meet as an adult. And some of these folks were kids I went to elementary school with, too, so the shared experiences just multiply. It felt like touching a little bit of a cornerstone.

Maybe — despite everyone’s nervousness, vacillating, and uncertainty — we all just need to make these connections every so often.

Maybe there’s something important about touching that cornerstone.

Feeling under the weather this week…

Do you have rituals when you’re feeling bad that make you feel better almost immediately? Certain robe? Orange juice and ice chips? I Love Lucy reruns?