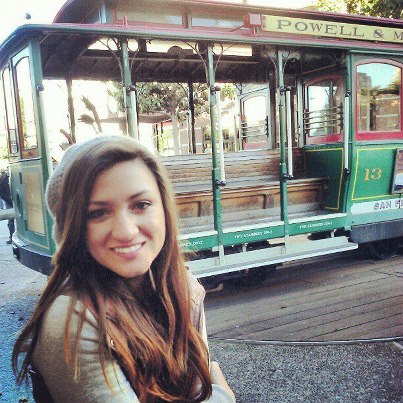 Although I had dedicated myself to a fiction-writing deadline that stole away pretty much every weekend of November, in the middle of it all I planned a four-day weekend getaway. … Yeah. Smart move. I don’t know what I was thinking. …

Well, actually I do. What I was thinking was: I’ve always wanted to take my kids to San Francisco. Rene is a junior already. My time is running out. November and San Francisco are a beautiful combo. I can’t let their childhoods slip by. …

So, despite the writing deadlines, off to Expedia I went, to plan something fun.

And here’s the thing: No regrets. Not one.

(I wrote once before how I never regretted a vacation, and that still stands. Despite all my before-we-go worries about money and time, little trips with my family always end up making up the bulk of my memories, and will probably be with me until I’m 100.)

I’m not much of a city girl, really. My idea of a vacation is someplace with pine trees, where all you can hear is a bird cawing or a river running. The further I am away from shopping, phones, people and modern day, the better.

But my younger two kids are different.

My oldest was always more like me. He was always kind of a relaxed, nature-y boy. Not exactly Indiana Jones and full of adventure, but more like John Muir – he liked the outdoors in a quiet, speculative way. He liked streams, birds (ostriches, specifically – story for another day), dinosaurs, parks, digging in the dirt, walks along dusty trails, that kind of thing. So Tahoe, Yosemite, the Grand Canyon, etc. were some of his favorite vacations, and we just kept going back there. (Partly because we loved them, too, and partly because the oldest child always dictates the family’s trajectory, am I right?)

Anyway, now that he’s out of the house – going for his own permanent relaxed, outdoorsy lifestyle in Montana – my two younger kids are looking for different kinds of adventures when we bring up family vacations.

Rene has always seemed uber-cosmopolitan to me, ever since she was a little girl. I remember being at an outdoor café with her when she was about eight years old, and she would cross her legs elegantly, with her long straight skirt on (mixed patterns, but always super-stylish), and pick up a pair of chopsticks like she’d used them all her life and start eating sushi or bean sprouts. … I don’t know. … She always just had that air about her, like she could and would absorb all the cultures of the world if you’d let her.

And Nate, too — He announced to me, one day when he was about ten, that he wanted to see “all the cities that never sleep.” He was fascinated with that concept. (This is the kid who chose to go to Hollywood for his 10-year-old trip, which should have been one clue.) After the “cities that never sleep” comment, we did an overnight in Vegas when we were driving Ricky to Montana, just so Nathan could see at least one city that never slept. (He wasn’t impressed. Although maybe that’s because his mean mom wouldn’t let him hit the craps tables at midnight. Or maybe because she was constantly trying to shield his eyes from all the girly flyers all over the sidewalks. I don’t know. …)

ANYWAY, these two younger kids of mine are city-ish kids. Who need to see cities. And we NEVER go to cities. We never even go to L.A. (right up the freeway), or San Diego, or even San Francisco. …

But … wait! We could go to San Francisco!

Chris and I always love to travel in November because every place seems more beautiful then, and San Fran was no exception when we went for our anniversary a couple of years ago.

So this time, we decided to bring Rene and Nate!

We rode on trolleys, walked around “shopping places late at night” (that was a specific request – my kids couldn’t believe Chris and I were up past 10!), let Rene gawk at (and then shop in) a 3-STORY Forever 21 store, went on a walking food tour through North Beach, drank cappuccinos, went to Alcatraz, rode a tour bus (Nate kept calling it the “safari bus”), took lots of pictures (Nate even did some “city art”), and just had an all-around great time.

My younger kids might be turning me into more of a city girl after all. …

Pics of our trip are here!

3 thoughts on “Taking Our Kids To “The City””