So Superman and I started a tradition years ago that he would take the kids on a “10-year-old” trip when each of them turned that glorious age.

It started with Ricky, of course. It was originally meant to be to give dad and son time for serious talks — about growing up, important things, time to connect. Chris thought a road trip was perfect. So he asked Ricky where he’d like to go, and Ricky said Oregon! (?) … Okay. … We weren’t sure where that came from, but it was a nice long drive, and would be perfect for a road trip. Ricky was a big sports fan, even back then, and decided he’d love to so see the Oregon Ducks play, so that was the plan — a weekend road trip to see the Ducks. They had a great time and were gone for two days. But Chris admitted that Ricky seemed to get a little “homesick” for the rest of us by the end of the second day.

When Rene came into that exciting new decade, Chris asked where she’d like to go. Less a time for “serious talks” now, the 10-year-old trip started to become simply be a rite of passage, and some fun time to bond with dad. Rene chose … Carmel! Excellent choice. Beautiful place. We had recently gone there on a family trip, and Rene fell in love with the little seaside town. She had been especially smitten by the fact that dogs are allowed all over in Carmel — in restaurants, in stores. So that’s what Chris and Rene did. They even tucked in a trip to the Monterey Aquarium. But he said that Rene, too, seemed to get a tad homesick by the end of the second day.

So this year is Nate’s big year! We wondered where he would want to go. To Oregon like Ricky? to Carmel like Rene? Maybe to another seaside place he loved? He contemplated Arizona — he loves sports like his brother and thought about maybe going to see a football or baseball game there. He thought about some beach towns. Thought about some national parks. But then — in a decidedly typical Nathan move — he surprised us all. Nate wanted to go here: 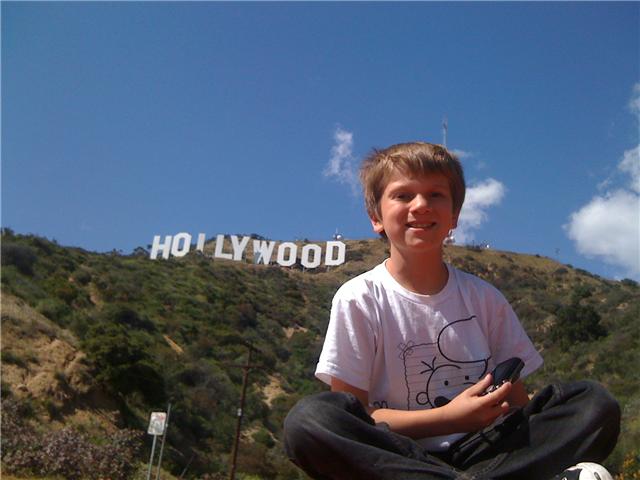 (I tell you, this kid never ceases to surprise me.)

Part of what he wanted to do was to go to L.A. to see airplanes take off from LAX (?). … Okay. … So Chris has the whole day today set aside for that — they’re going to get burgers and go sit on the hood of the truck and watch planes take off. The other part of the trip is about visiting the Hollywood sign (which they already did, as evidenced by this photo they sent me), Graumann’s Chinese Theater, the Kodak Theater, and maybe see some of the Hollywood Tower. I believe a visit to Barney’s Beanery, the diner from “Swingers,” and the L.A. Ink tattoo parlor were also on the agenda. (I sure hope Nate doesn’t come home with a tattoo!) The one thing we did differently this time is that Chris changed the trip to one night instead of two — he said our kids seem to love to be with their family so much they get homesick when we’re all split up.

But that’s the only thing he’d recommend differently, I’d guess. The 10-year-old trip has been a great source of memories for the kids, and a great time for their dad. We highly recommend it! : )