So back to the trip:

We woke up on Day 5 — exactly the halfway point — and had a perfect, slow, halfway-point day.

Sleeping in a little was the first order of business.

Laundry was the second.

A 10-day roadtrip for four people in one car can only handle so much luggage, so we packed only for 5 days, and I told everyone I’d do laundry on Day 5 and we could “repeat.” It was a perfect plan. I knew the hotel we were staying at (we’d been there before), and knew we’d have a leisurely morning (not having to be on the road asap), so while we enjoyed the nice continental breakfast in the dining room, I got two quick loads done. Then we re-packed, loaded the car up, and prepared to head to Kalispell later that evening.

But first — we had a whole afternoon with Ricky! The original plan was to bring him to Kalispell with us (and Glacier National Park), but it was his first week of school, plus he has a few new jobs at the newspaper, and he just didn’t want to shirk off everything, so we understood.

We hung around the University of Montana campus a little, visited the bookstore, then met Ricky in “The Oval” (the center of campus, shown below) and he took us on a little tour. Nate, of course, is being his hammy self: 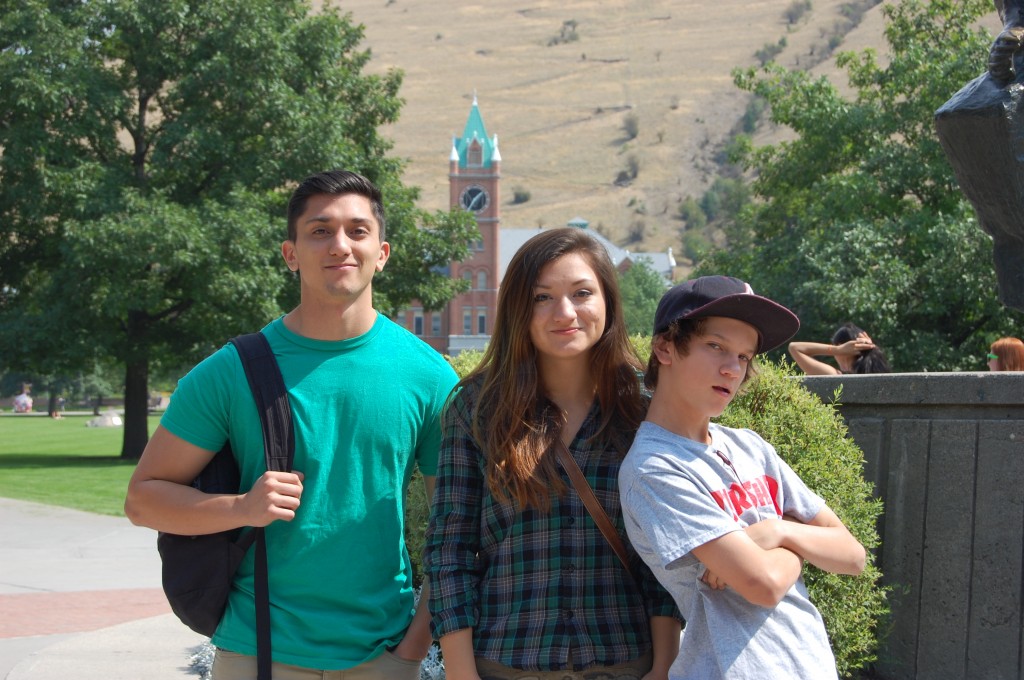 Chris and I often let the kids walk in front of us because we love to see them fall into step together, and talk the way they do: 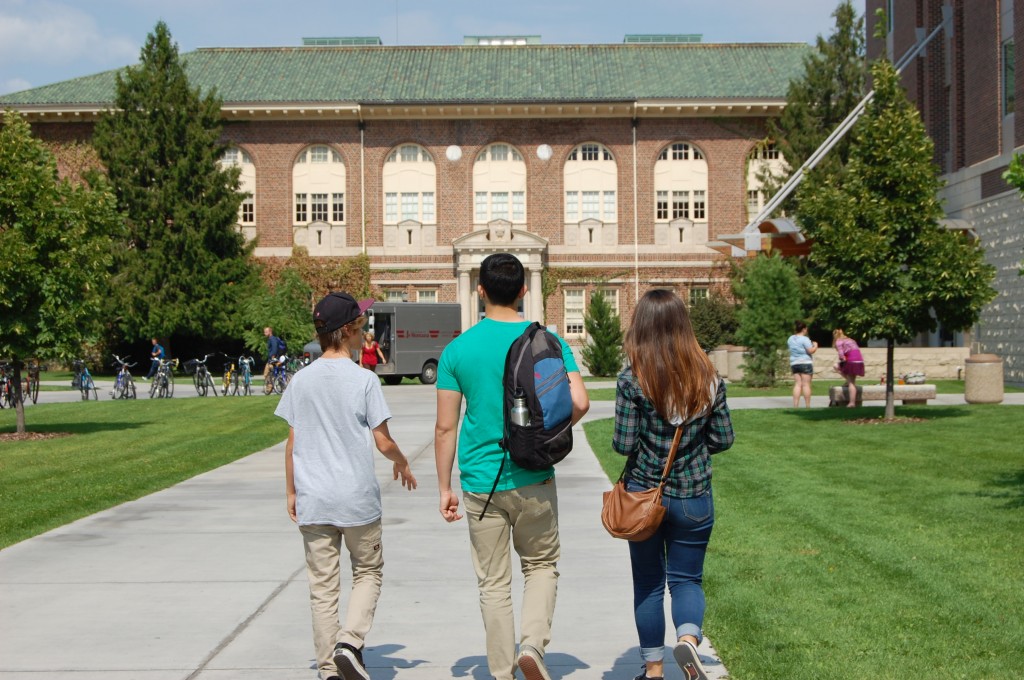 Ricky took us to where he spends 90% of his time — the J-School. 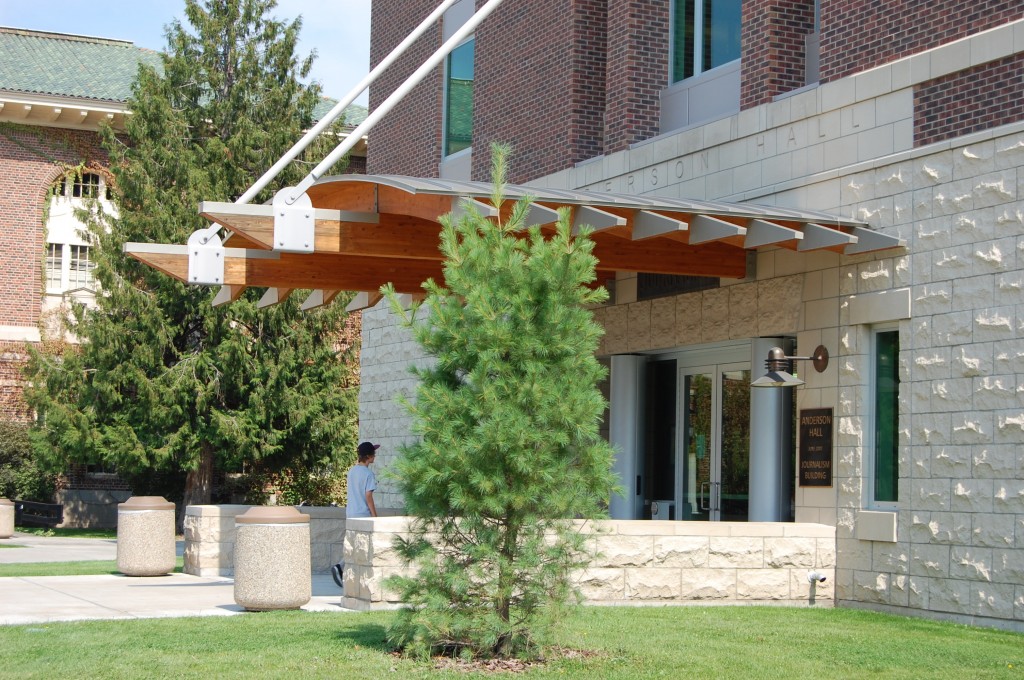 That’s where they have all the journalism classes and where they put together the school newspaper, The Kaimin.

They have a nice lobby with an antique desk and typewriter. Nate, of course, had to try it: 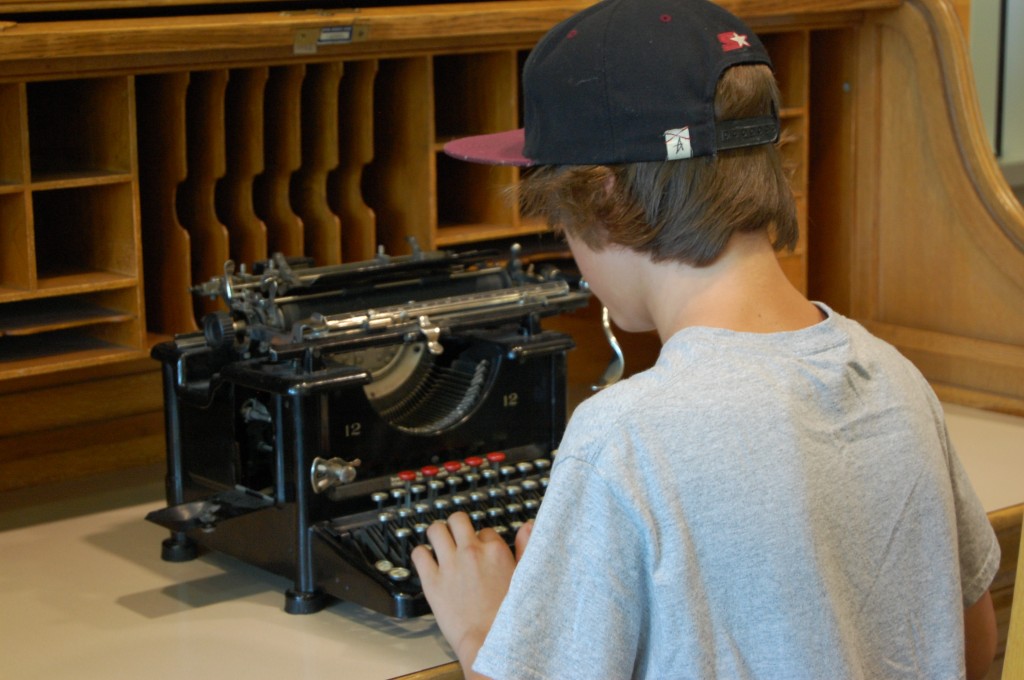 A trophy case with all the Pulitzers and awards. (It’s a very good newspaper!): 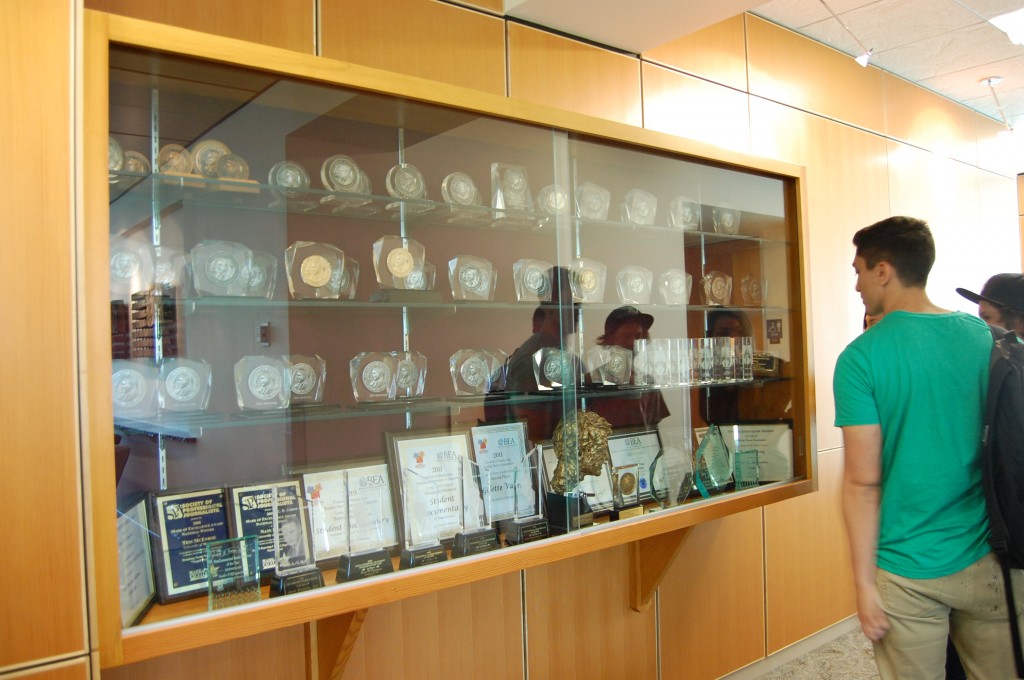 A nice waiting area with “Kaimins through the years”: 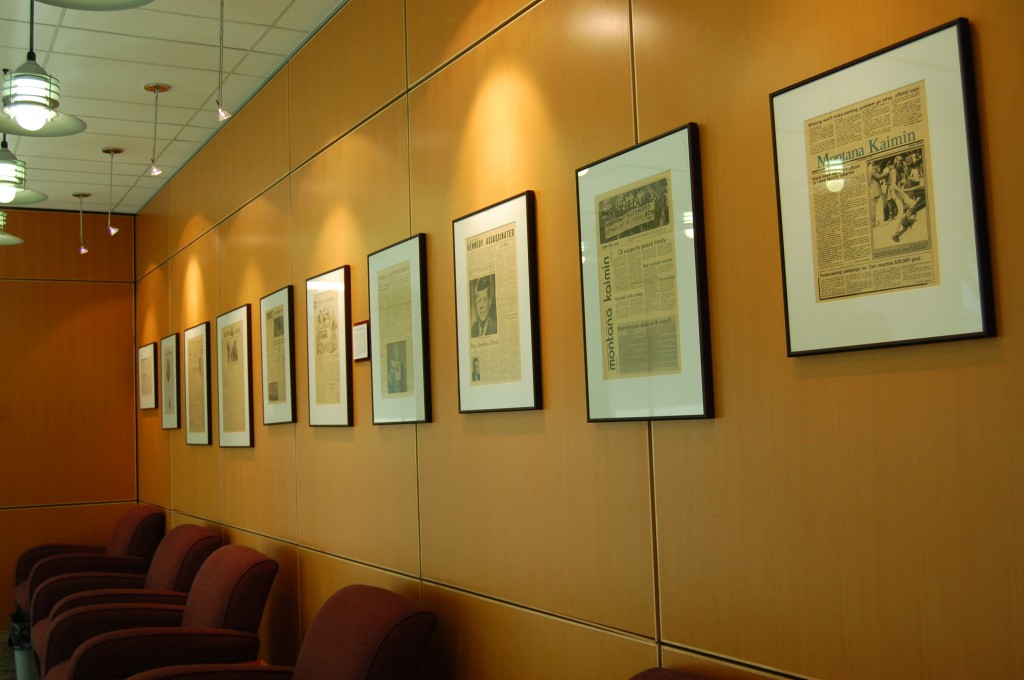 And a very cool “News” sign, manufactured in the 1920s and donated by a local family, right outside the newsroom door: 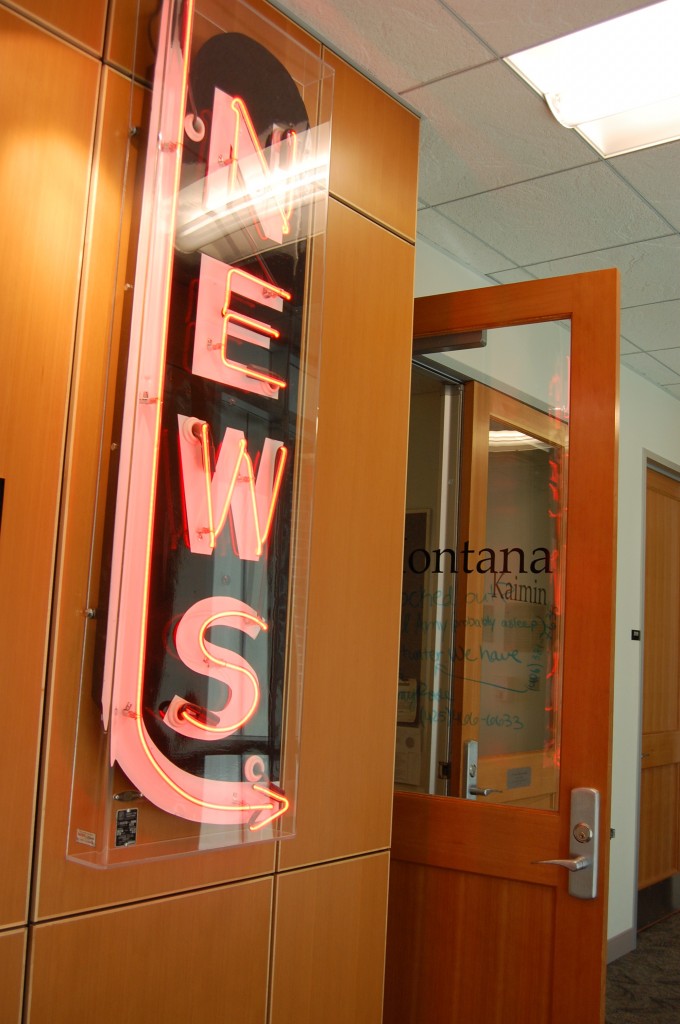 Ricky wouldn’t humor me by sitting at his Kaimin desk, but Nathan did, so I snapped a shot. (Nice computer, huh? I’m totally jealous.) 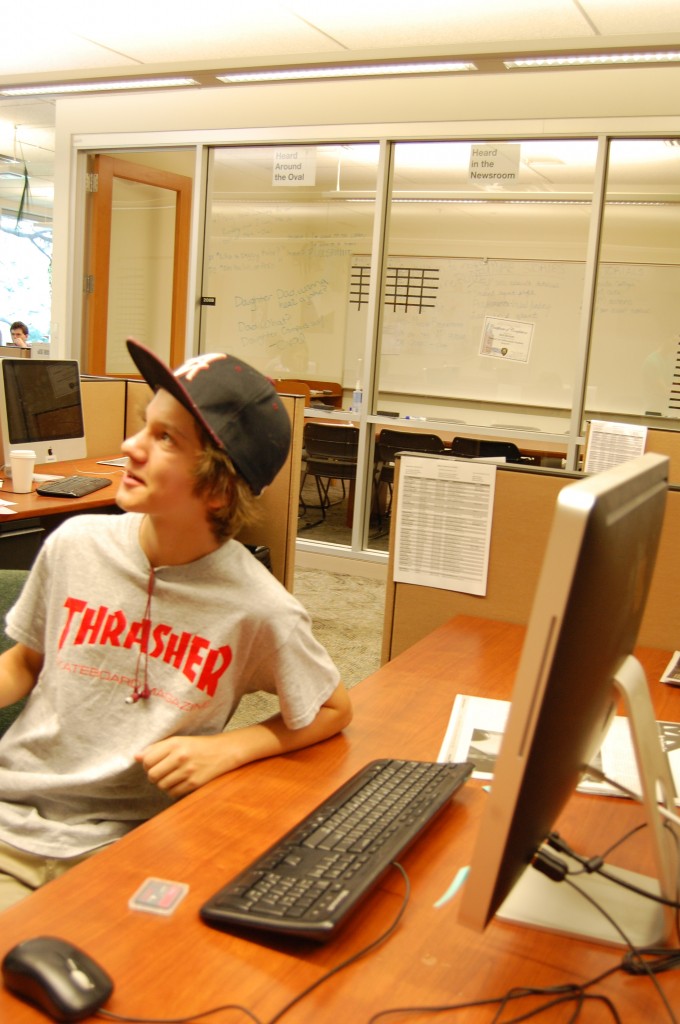 Ricky really loves The Kaimin, and it’s become his home away from home. He’s met many of his closest friends there, and the J-school group is almost like a little fraternity. Anyone who’s ever worked on a news staff — either in college or outside of college — probably knows what I’m talking about. Because of the constant late hours, you really bond when you’re a small staff.

Anyway, after the tour, we went to lunch at another of Ricky’s favorite places, Tamarack Brewing Company. It’s known for its brews, so Chris had an ale mixed with port or something, and Nathan had a freshly-brewed root beer. I guess this is Nathan’s face for someone who drinks beer … or port … or something. He’s a goofball: 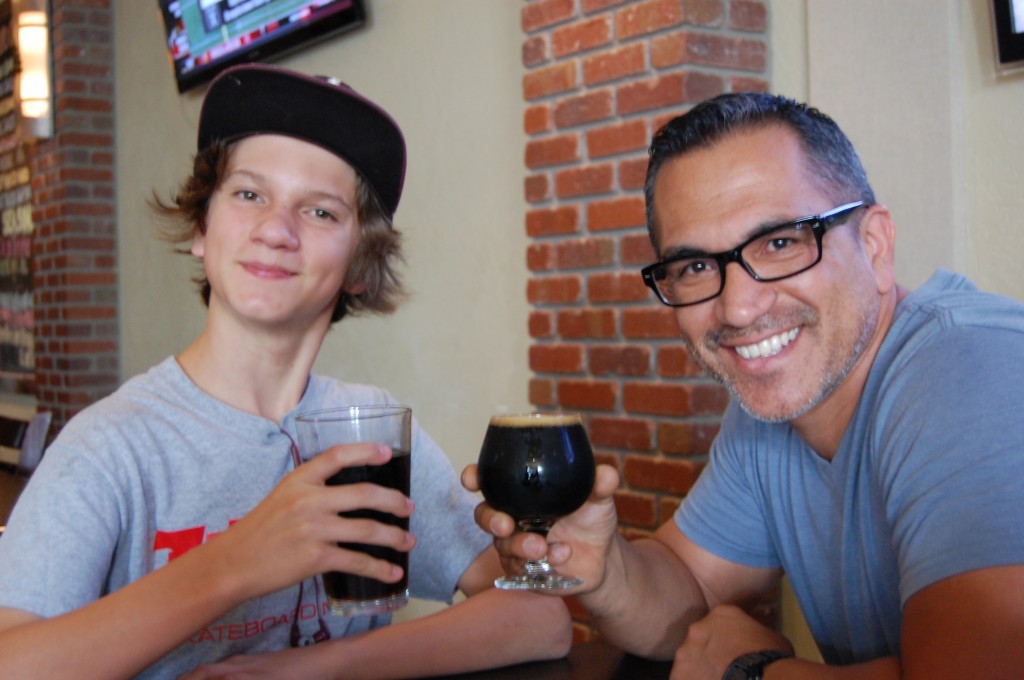 I had the most delicious salad made with spinach, apples, wedges of warm brie cheese, bacon, walnuts and huckleberry-mustard vinaigrette! Huckleberries are a very big deal here in Montana. You see them everywhere. (Maybe just in the summer, though? I’m not sure.) They’re a tiny bit bigger than a peppercorn, and are a deep purple. And sweet. Here’s my salad. Yum: 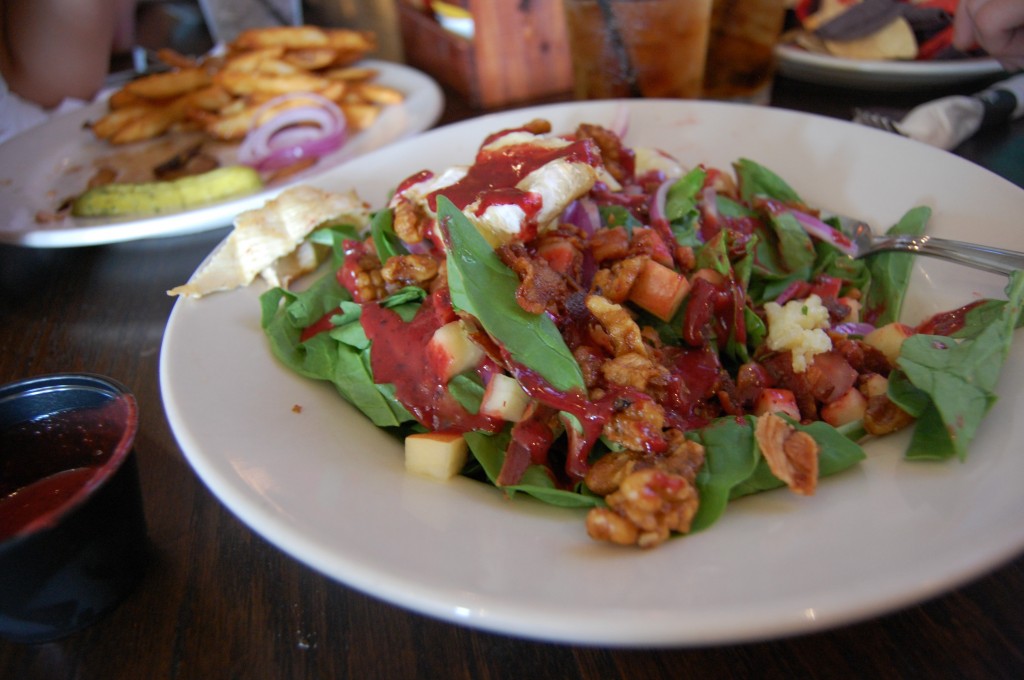 After lunch, we drove past the uber-cute, picturesque downtown to the less-picturesque “Reserve” street, which basically looks like Orange County and has every major strip-mall store you can think of.

We went to Target, of course.

We picked out some stuff for his room, but we didn’t buy everything yet (like bookcases) because the back of our car was still packed for Kalispell. We realized we’d have to do that when we got back. So we just bought some sheets and things and headed back to his place. Rene gave him the painting she did for him on our dining table right before we left. (He wanted a sasquatch!) Is this cool, or what? 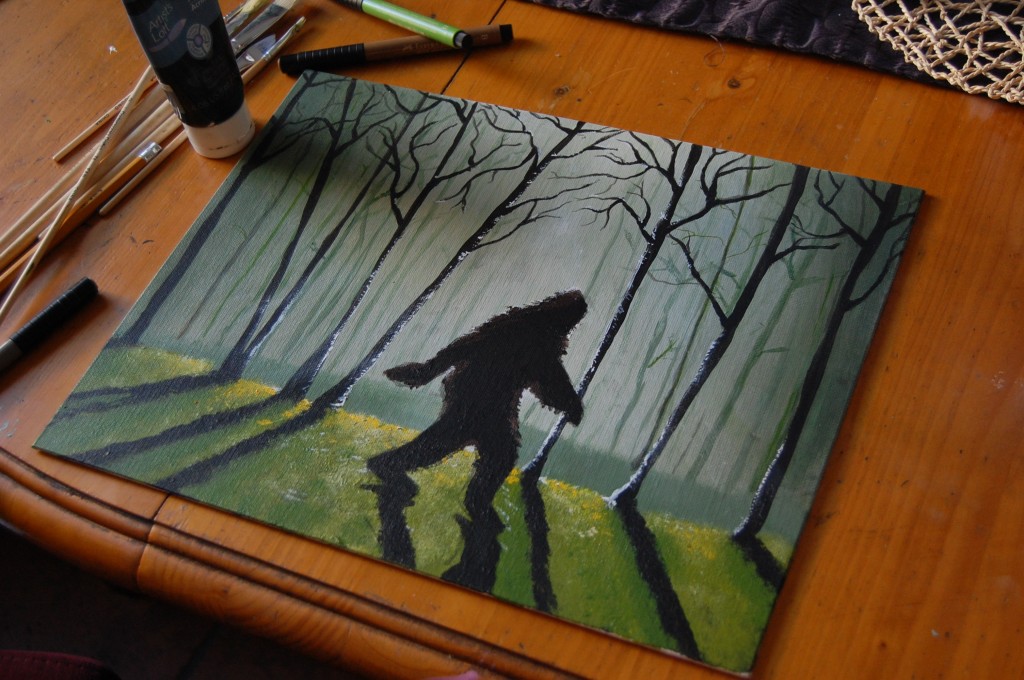 We put the painting in his room, made up his new bed, and then took him to dinner. It was sad to say goodbye, but we were going to see him again in two days!

Then it was off to Kalispell, which is the “gateway to Glacier National Park.”

The drive up to Kalispell from Montana took about 2 hours and was very, very pretty, rounding Flathead Lake. We got into Kalispell pretty late, and pulled into our hotel, The Red Lion Inn, which was one of the strangest setups I’d ever seen: It was attached to a shopping mall (literally — like they shared carpeting, and JC Penney was steps away) and they had a casino between them (??). Very odd. But for some reason, this turned out to be one of the most fun nights.

We weren’t very hungry due to the huge lunch at Tamarack, so we just explored a little, found a strange deserted ballroom and a guy who looked like he should have been in The Shining, went across the street and picked up a pizza and brought it back to nibble on in the room while Rene and I watched The Notebook, and Nathan made his own movie with his iPod. It was a silly, fun night.

Next up: Glacier National Park!

2 thoughts on “Road Trip! Day 5 — Hanging Out in Missoula”