Anyway, after the Oregon-college tour, we headed through Portland, where we’d wanted to stop, but decided to keep going to spend more time in Seattle. My main thought about Portland: IT’S SO MUCH BIGGER THAN I THOUGHT! I wasn’t expecting a full-on city for some reason. Looked nice, but we only saw it from the freeway.

Once in Washington, the drive turned super-green again — pretty, pretty trees. Mostly pine. Very calming. It started to rain. We did another brief detour to Puget Sound, so Rene could see The University of Puget Sound, which is a teeny-tiny college she was interested in. I thought Puget Sound was pretty. Seemed like an island (cottage homes, small streets, small-townish, so much waterfront), although it’s not. I’d love to write a story about a place like that.

After that drive-around, we headed into Seattle and checked it out. Checked into the hotel, freshened-up, then headed out to dinner. We walked along the waterfront a bit: 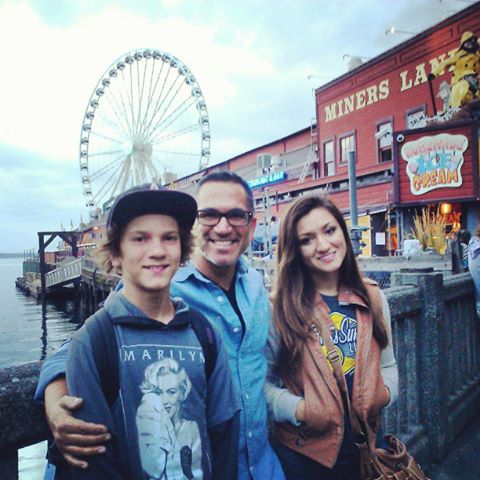 We rode the Giant Wheel so we could take in the view of Seattle at sunset:

We ate crab at The Crab Pot, then walked through the city a bit and looked for the building where Ricky did his internship at Seattle Met. (Found it!) So then we could visualize his day, riding the bus to the corner, walking down to the brick building. He was almost RIGHT across from the Giant Wheel. Very cool.

Then it was back to the hotel, where we pretended we were in the show Frasier, and relaxed and got some sleep before tomorrow’s drive. Our family assessment: Everyone wants to come back to Seattle and spend more time.