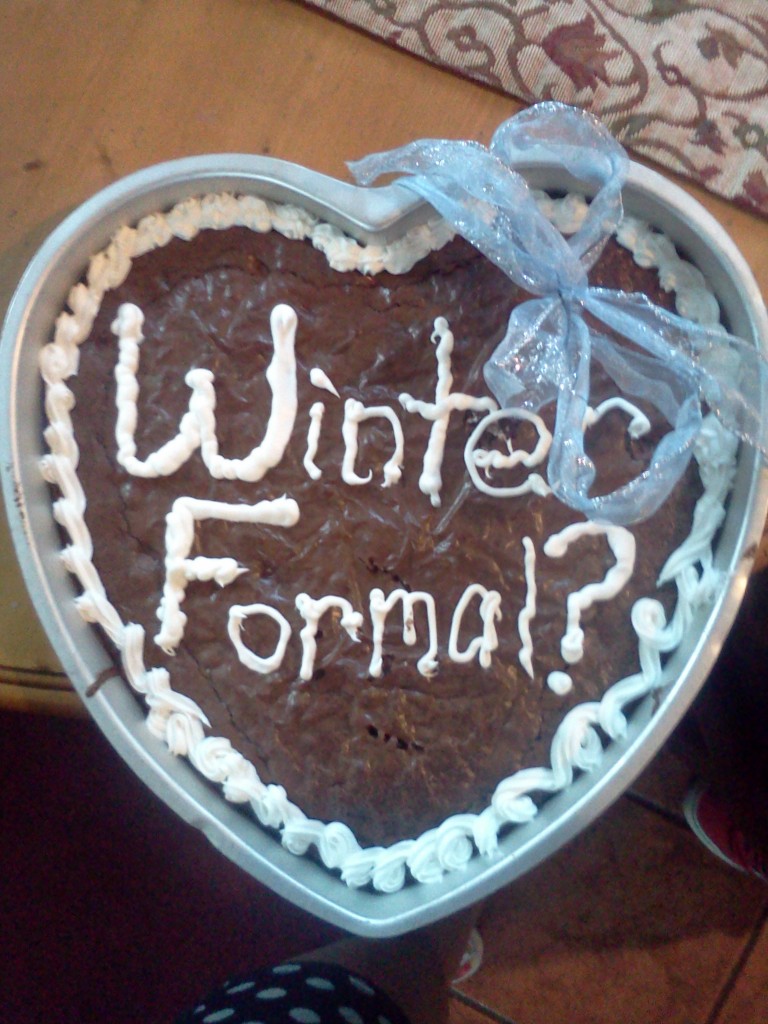 I’m pleased to say that romance is alive and well in the realm of teen-dom. And – when it comes to dances – it’s also a bit elaborate.

Gone are the days when a boy would just ask a girl “Will you go to prom with me?”

Now, things are WAY more complicated. Just to ask one another to prom (or homecoming or winter formal), there are now scavenger hunts, baked-goods deliveries, car-sponge-paint, balloon bouquets, or sky-writing.

(Okay, I’m kidding about the sky-writing, but I’m sure it’s not far behind.)

My son – alas – has fallen into this pressure.

He and his buddies loosen their collars with angst until they can think of a most-creative and most-romantic (and don’t forget original) way to ask their respective dates to prom or homecoming. The pressure is on about four weeks before the dance, and doesn’t let up until the asking has been done, because they’ll hear continuously what all the other boys have done, or will hear in the quad about what some clever boy at another school has done, or will hear from their girlfriends how so-and-so did this ultra-romantic thing. …

Here are some of the “proposals” I’ve heard:

So what do you think of this new trend?

I have to admit, I’m looking at this from the guy’s perspective (I’ll probably see it differently when my daughter is getting asked), but I do see it as a lot of pressure girls are putting on the boys. I think they just crave romance (what high school girl doesn’t?), but it’s a lot for the boys to keep topping themselves, and I wonder if the girls are going to be sadly disappointed when they go off to college and don’t find this same level of attention.

What do you think?