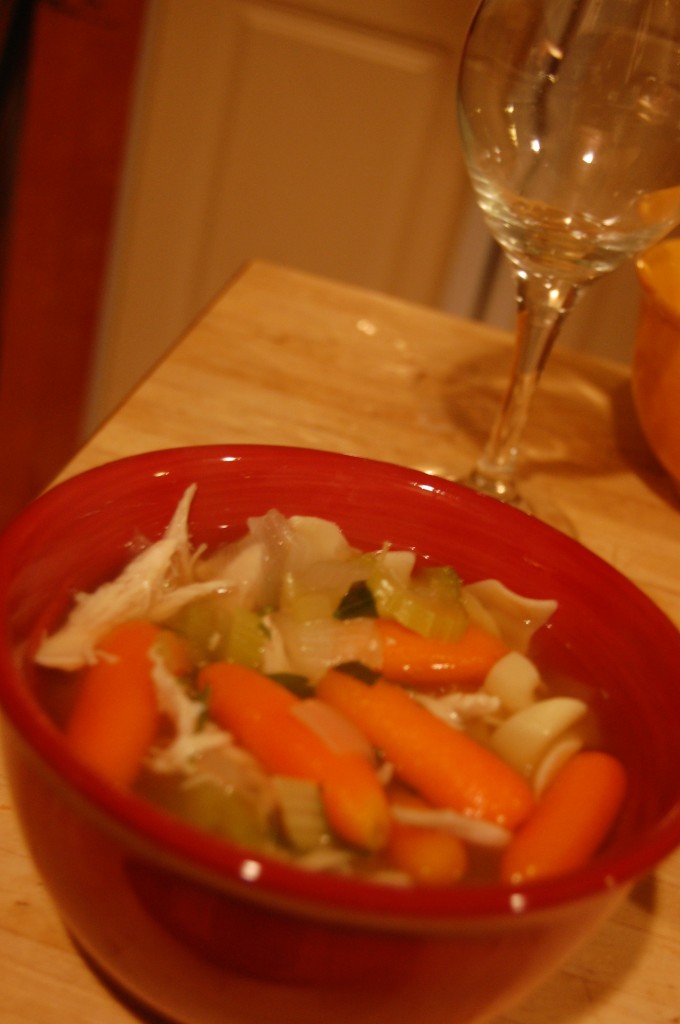 We’ve been a little under the weather for the last couple weeks (as this terrible head-cold that’s going around has made its way through each family member!), so Superman and I have each made a version of “Mom’s Homemade Chicken Soup” over the last two weeks. The “mom” in the title is my mom. It’s her recipe. And everyone loves it.

A generation later, I’ve made it enough now that my kids think it’s mine. So now I, too, have a “Mom’s Homemade Chicken Soup.”

(But every kid needs to have a “Mom’s Homemade Chicken Soup,” don’t you think?)

It’s really easy, and we don’t even bother to make everything from scratch. (Because when you’re sick, you often don’t feel up to it, am I right?) And there’s only one key secret, which is at the end. So here’s how we make it:

Buy your ingredients: 3 cans/boxes of chicken broth, 1 bag of wide egg noodles, 1 onion, a bag of peeled baby carrots, celery stalks, parsley, and a roasted chicken. That’s it! (If you’re feeling in the mood for some comfort-food bread to go with this meal — we usually do — choose your fave.) 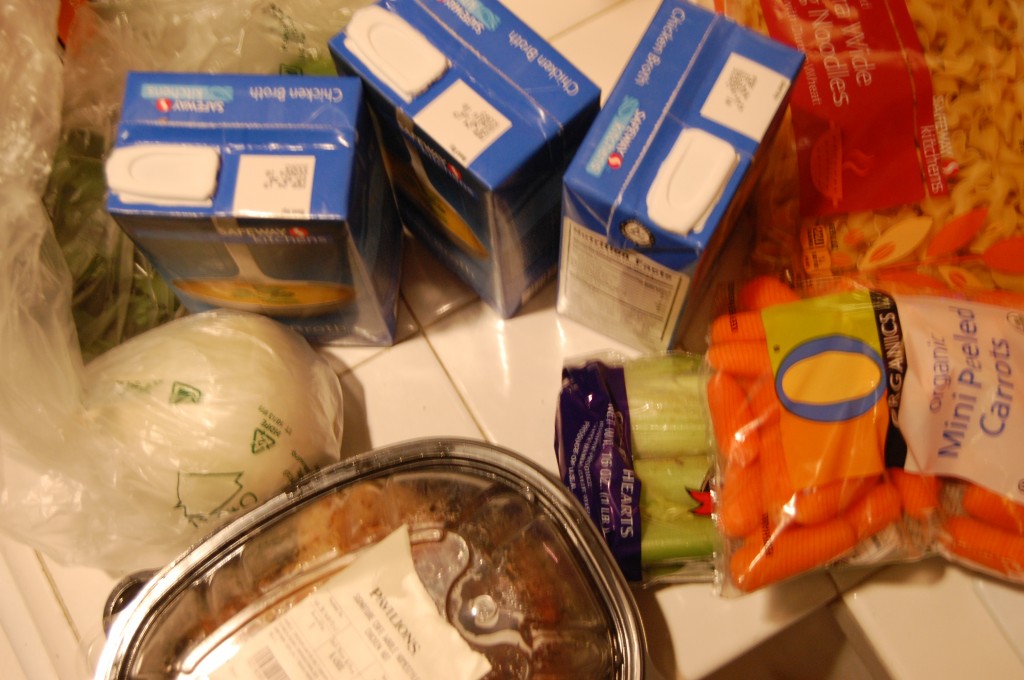 First, pour the three cans/boxes of chicken broth into a large pot over medium-high heat: 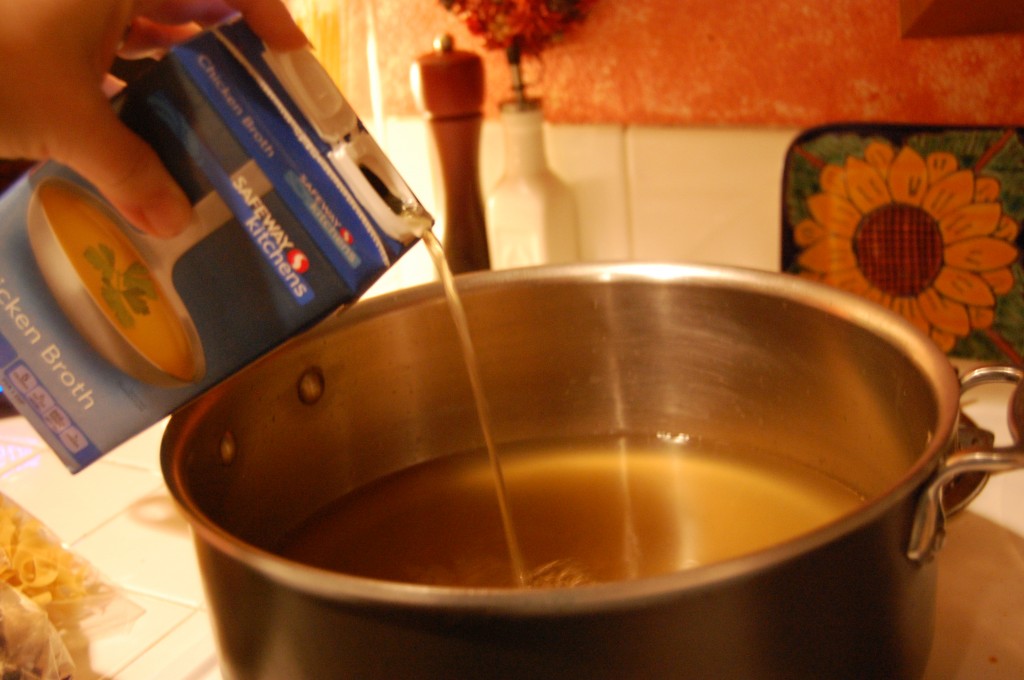 Next, throw in the whole bag of baby carrots. (They take longest to cook, so you’ve got to get them in right away.) We always use baby carrots because they’re slightly sweet, and they add the greatest contrast to the rest of the soup. 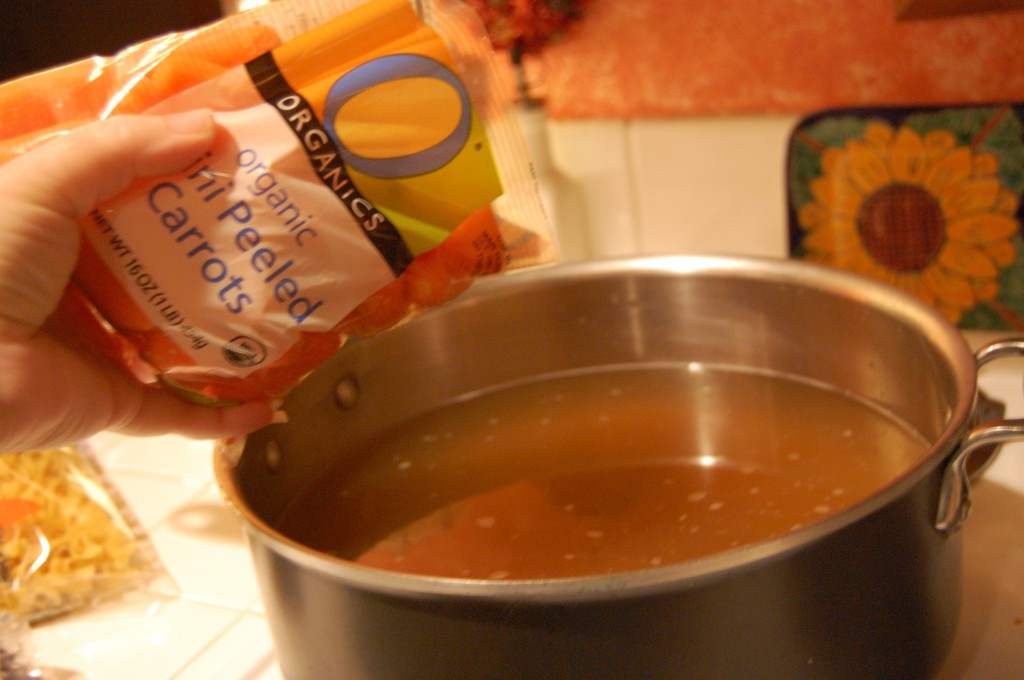 Next, add your onion. I only use a half onion because my kids act like I’m poisoning them by including onions, but it really does give the soup a nice extra flavor. I chop it roughly and in big chunks because (a) it’s easy, and (b) my kids can pluck them out better. 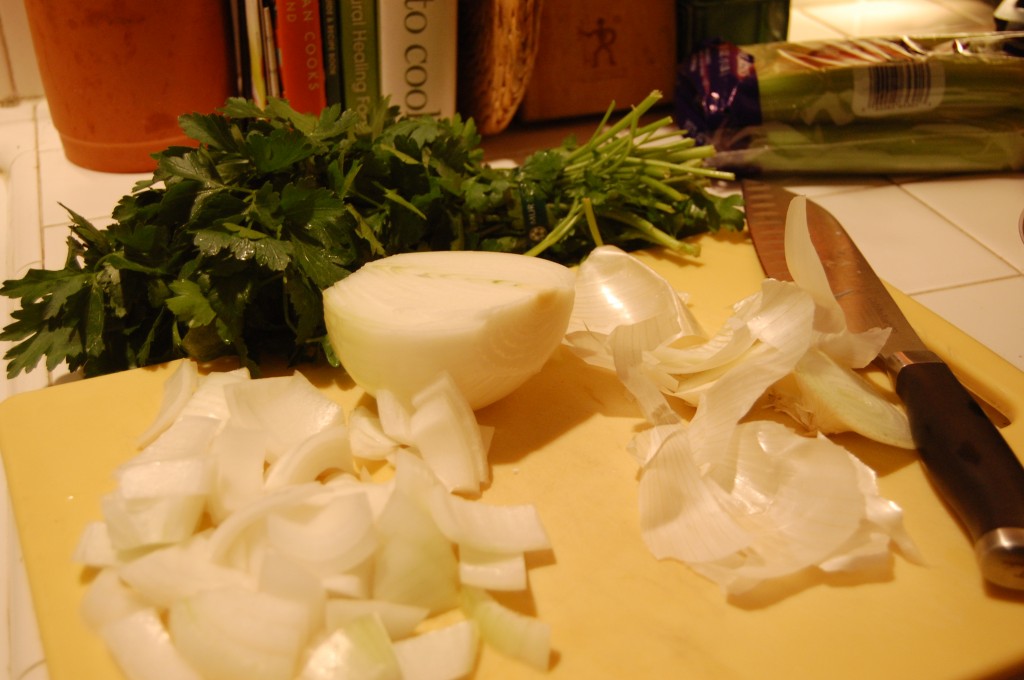 Now that the carrots and onions are softening up in the broth and adding lots of flavor, you can tend to other things. Like if you’re adding bread or something to the meal, you can get that going. I had decided to have cornbread this night, so I mixed that up and popped it in the oven: 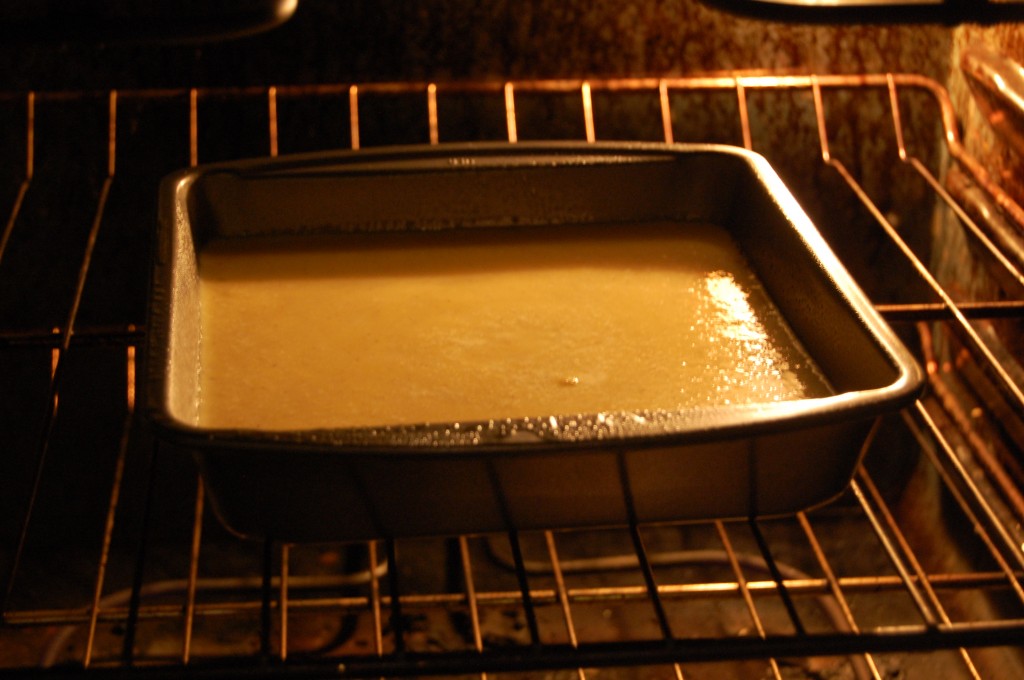 And, of course, you can then pour you and your sick hubby a glass of wine: 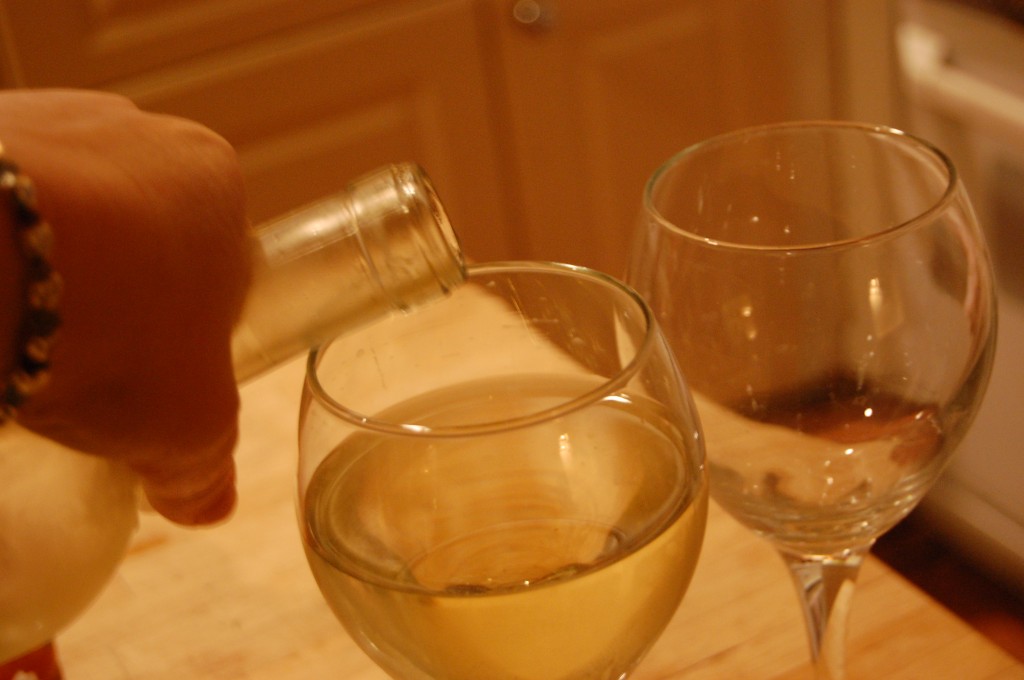 Your broth should be boiling now, so you can lower the temp to “low” for a simmer and cook the rest of the meal on that temp: 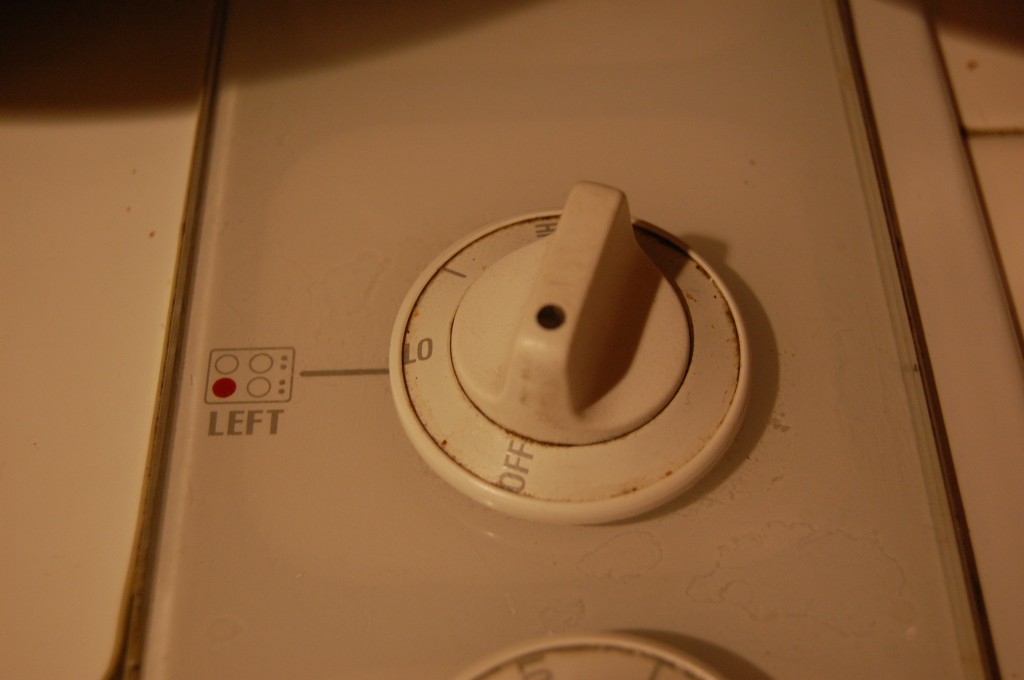 Okay, next comes the celery! Chop it up into thin little slices, as much celery as you like (I think I did about five half-stalks, as the kids only like the VERY dark green part of the celery!): 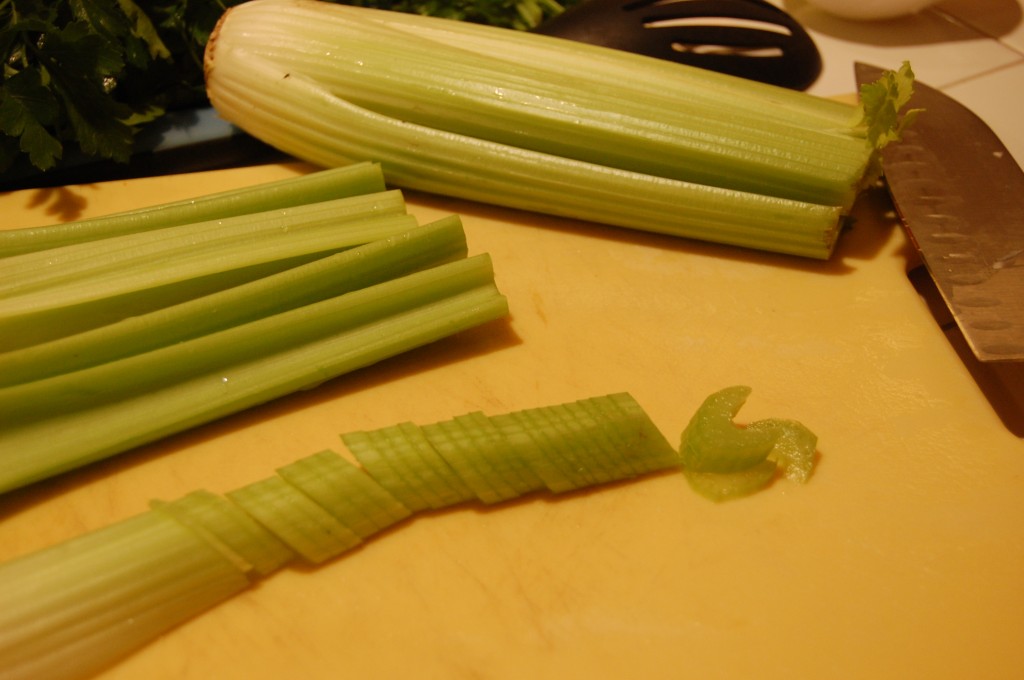 Toss the celery into the pot: 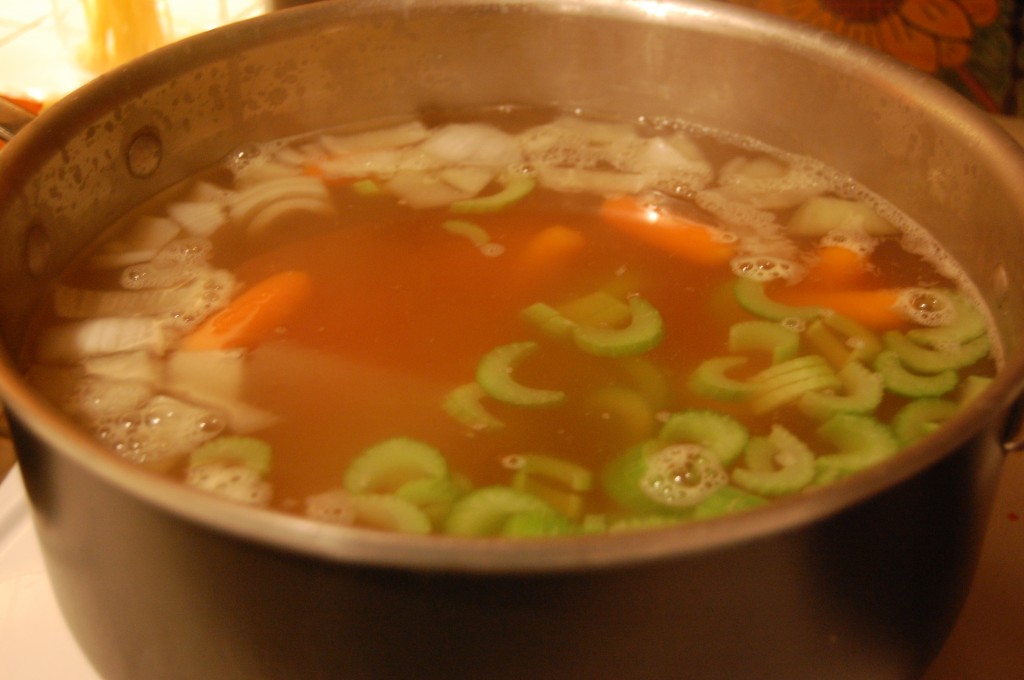 Then start shredding your roasted chicken. I used the “two-fork” method of pulling it apart with two forks to get nice, long shredded strips: 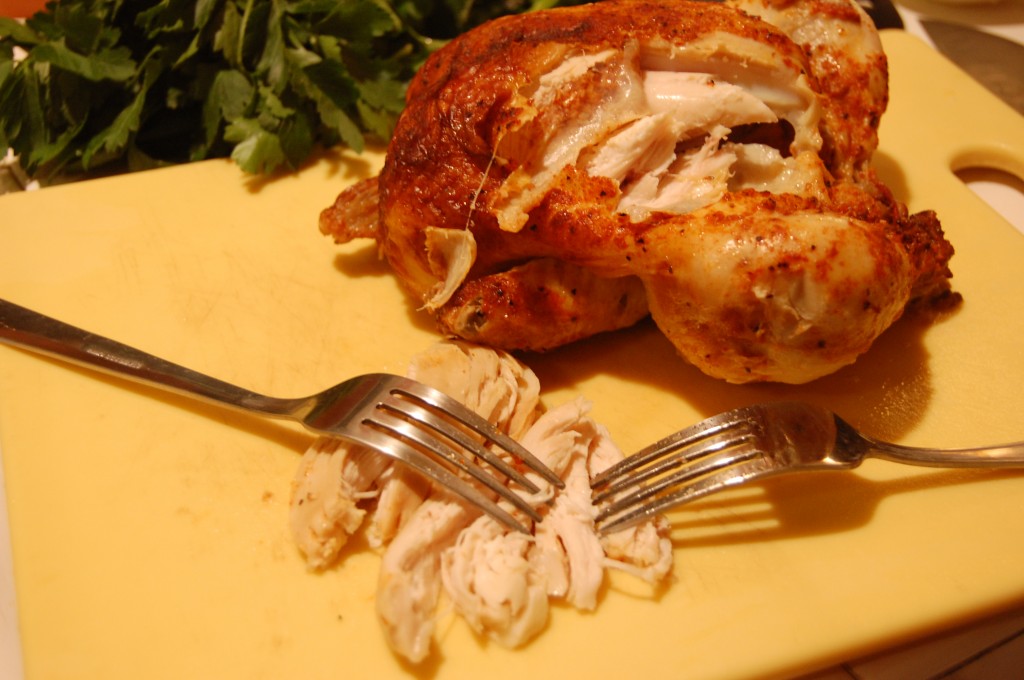 And I add the chicken to the pot as I go: 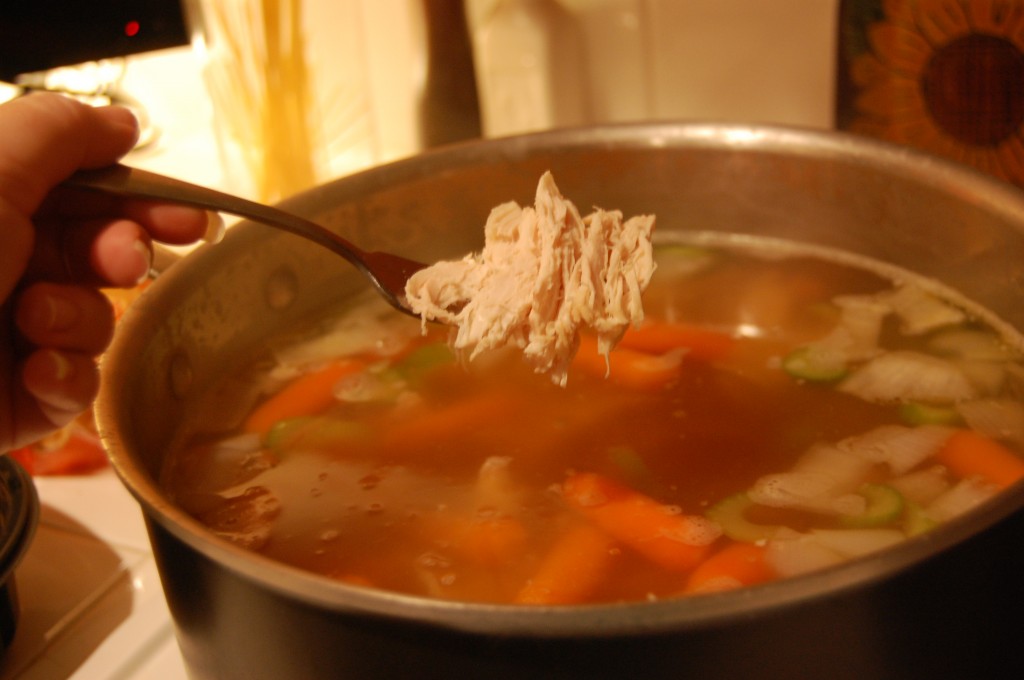 Have a sip of wine and keep shredding the whole chicken. Your soup should start looking like this! Yum: 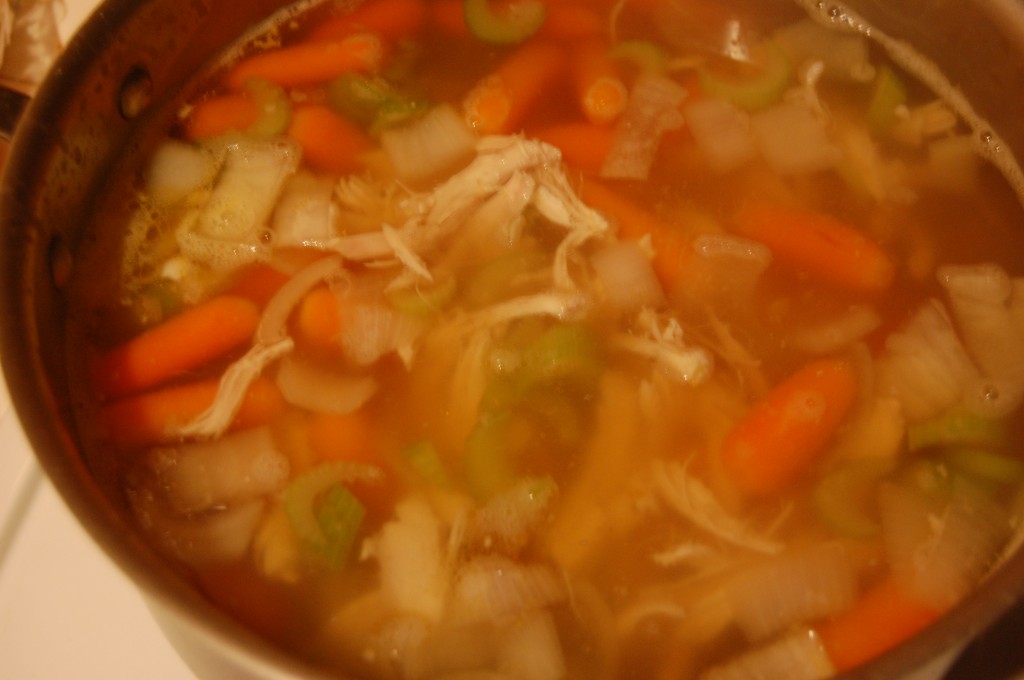 Ooops! Cornbread’s done! If you started some bread, get that out of the oven and give it a nice glossy, buttered top while it’s still hot. Sometimes we serve the chicken soup with fresh, crusty French bread as well — whatever floats your boat and makes you feel comforted when you’re feeling sick: 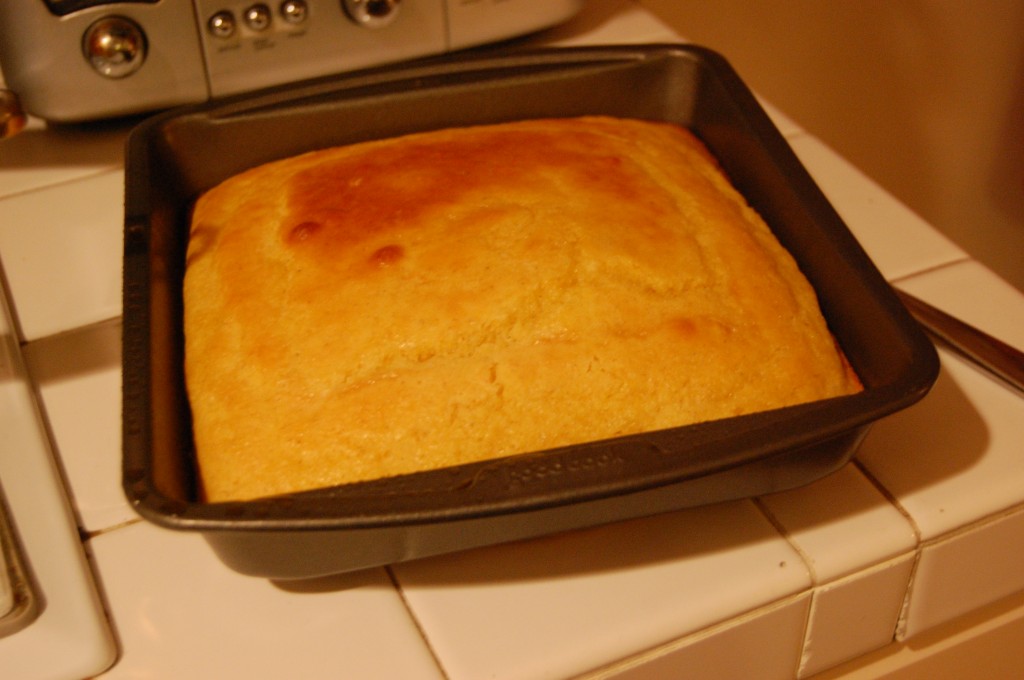 Next, chop up your parsley. We use whatever parsley is available at our grocery store, but the flat-leaf type is best: 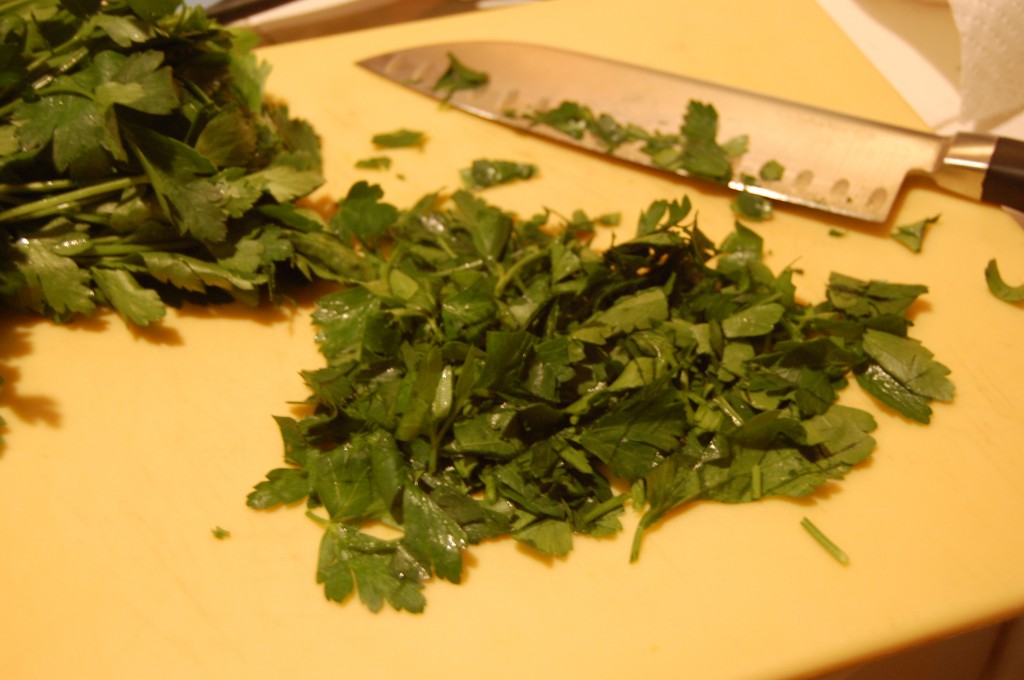 Add that into your pot. Now, everything should be smelling divine and your kids will be coming into the kitchen to ask what smells so good. And your pot should look like this: 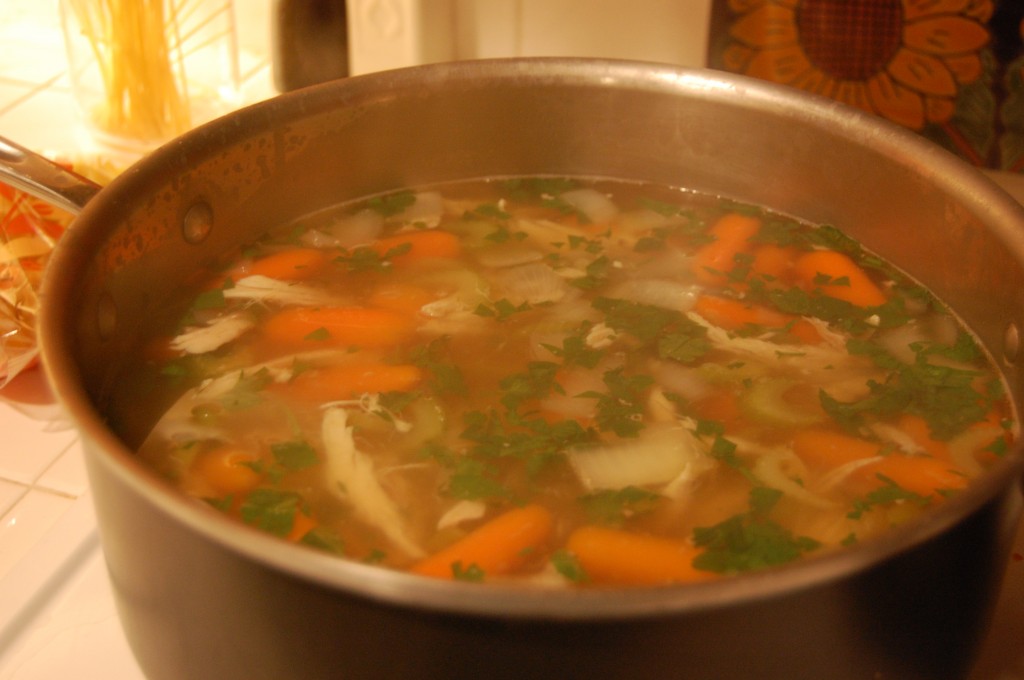 Now here’s the big secret I told you about! My mom always made the egg noodles separate! This keeps them from getting soggy in the soup and makes sure they always taste delicious and slightly al dente, no matter how many bowls of soup you have! So set up another small pan of water on high heat and, once it’s boiling, add as many egg noodles as you can (I can usually get 3/4 of the bag in this pan): 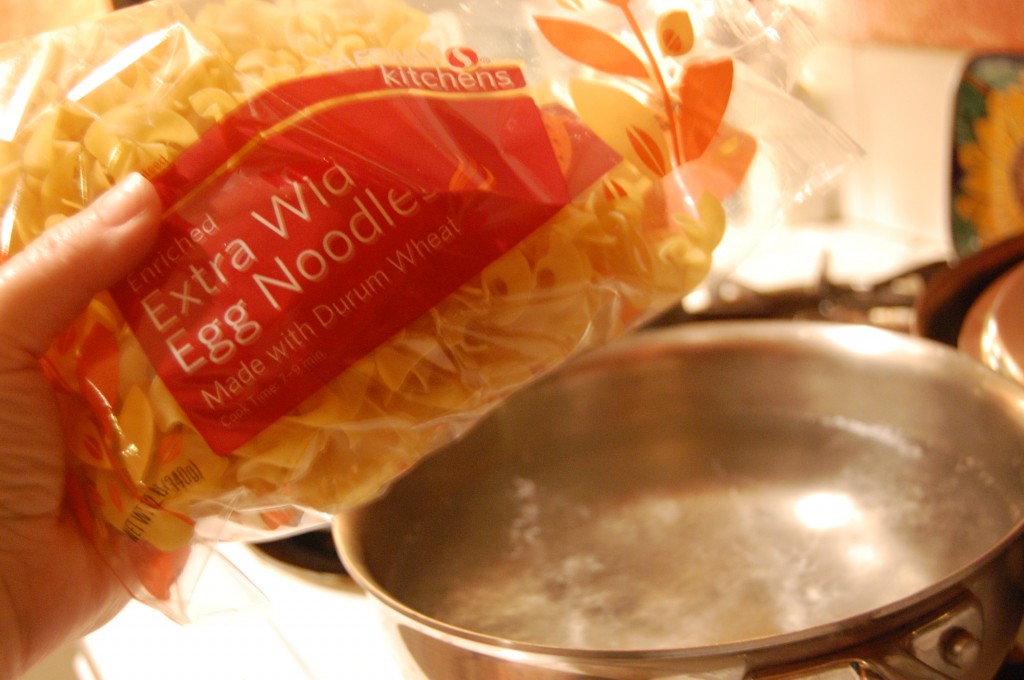 Set them to boil for only about 8 or 9 minutes. You’ll want them slightly al dente. Once they’re done, turn off the heat, drain them, and put them back in the pan next to the soup pot: 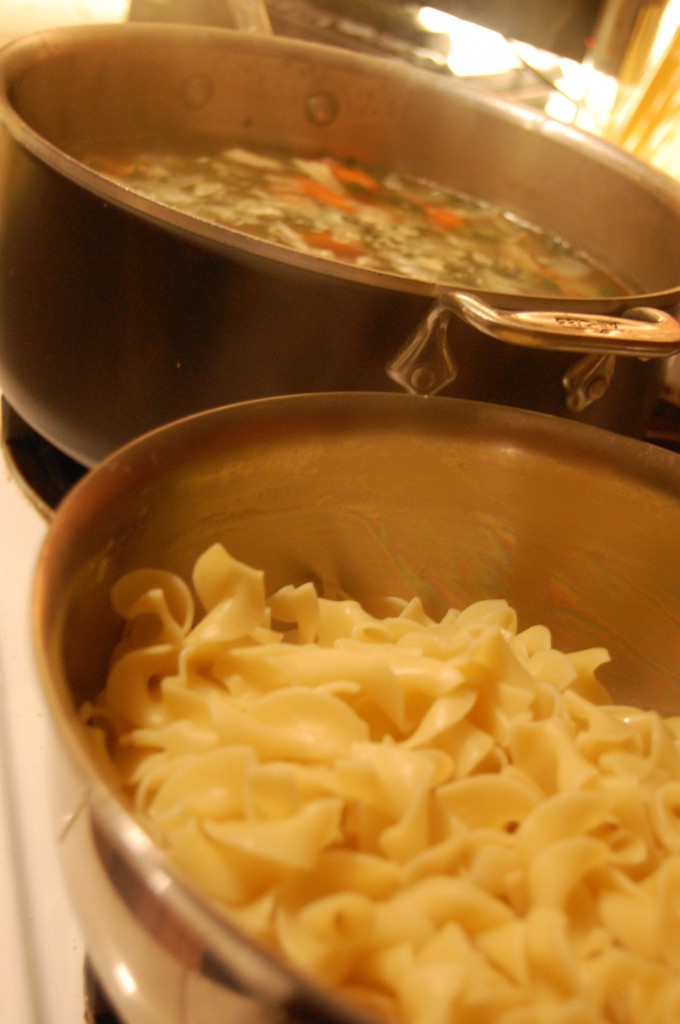 And you’re done!!! Now you can call everyone to dinner!

Scoop one big spoonful of al dente noodles into each bowl, then top with your delicious homemade soup, a side of bread, and a side of love! 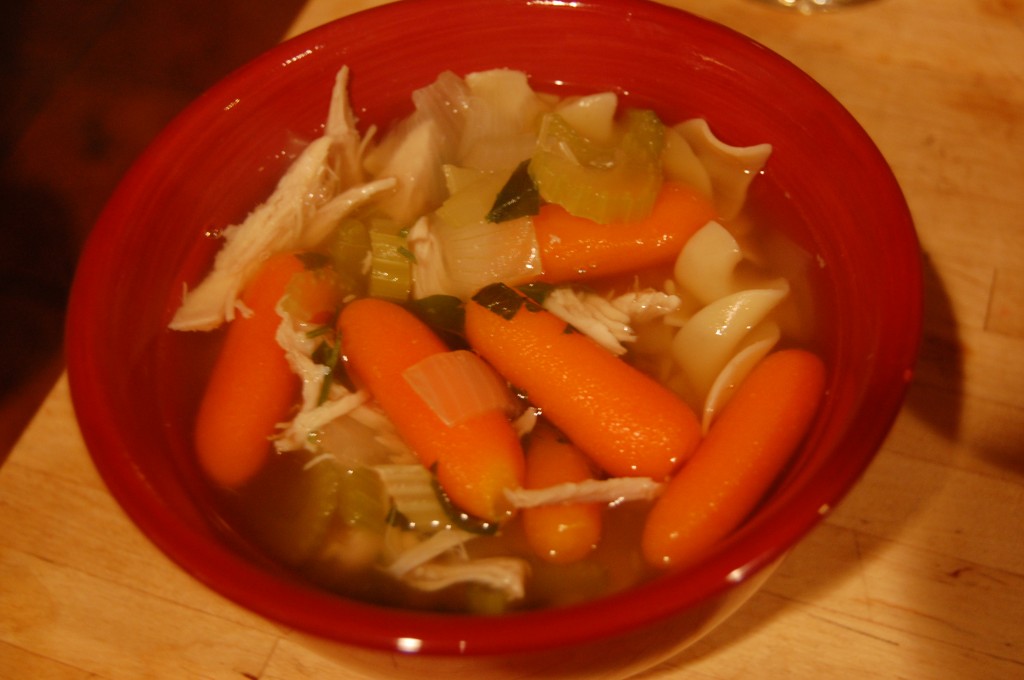 Everyone is sure to be feeling better in no time!