We had so much fun this weekend going whale-watching!

I received tickets from Dana Wharf Sportfishing and Whale Watching Co., who hoped we’d have a good time and would do a write-up for my other blog — Things To Do In Orange County.

I’d never been whale-watching before, so I was excited to give it a try. And Superman had brought it up a few times as something he’d like to do. And both my teens were really excited about it. (Rene even had it on her “high school bucket list”!)

So we were off!

We went to pick up our tickets at will-call in Dana Point Harbor, then had about 45 minutes to kill, so we wandered around the harbor area and looked at the shops and boats. I always forget how pretty Dana Point Harbor is! 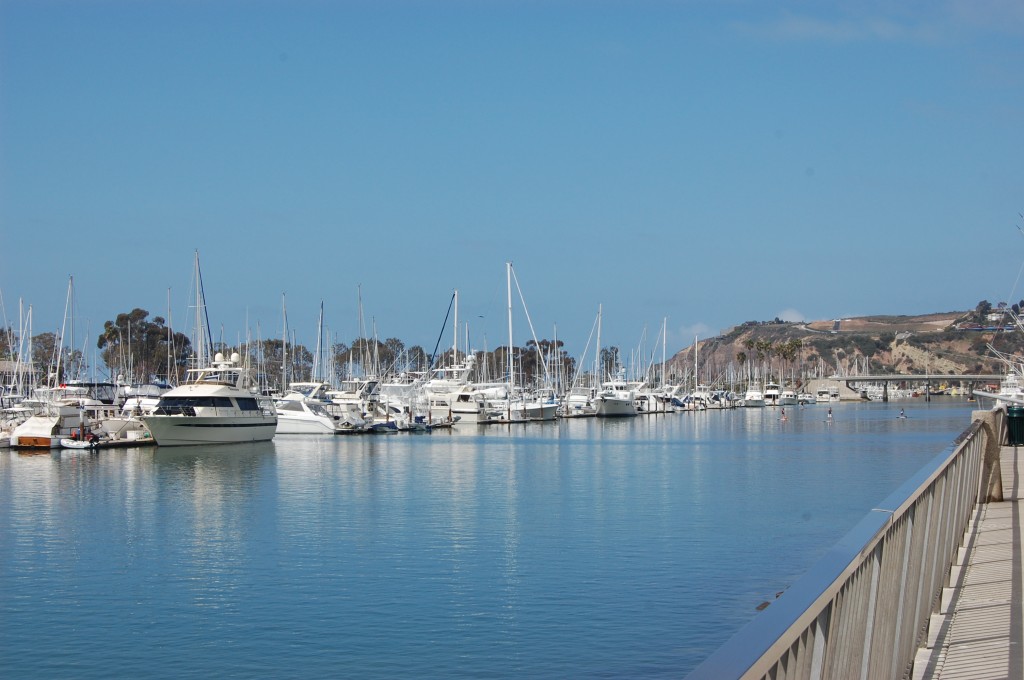 We chose a noon boarding time (options were 10 a.m., noon, or 2 p.m.), which was perfect because the morning gloom burned off right around 11:45, and it got sunny just as we were boarding.

We boarded The Dana Pride: 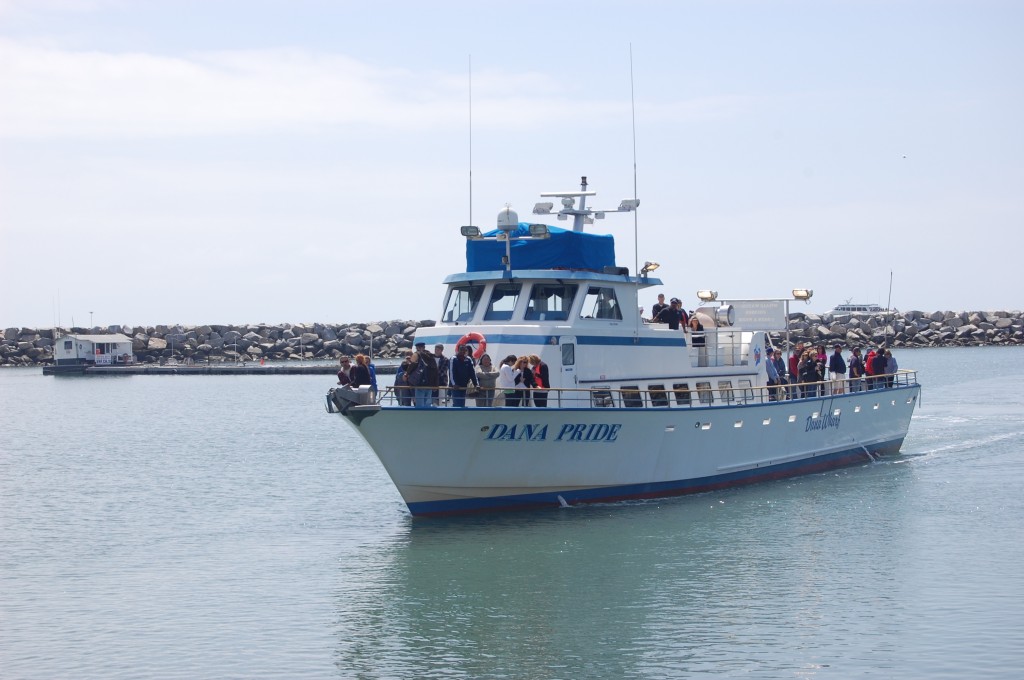 The four of us stood toward the front, on the right side of the boat (starboard??? I’d make a terrible sailor…), which was perfect because we had a great view of the coastline all the way up. It was fun to look at Orange County from the water: 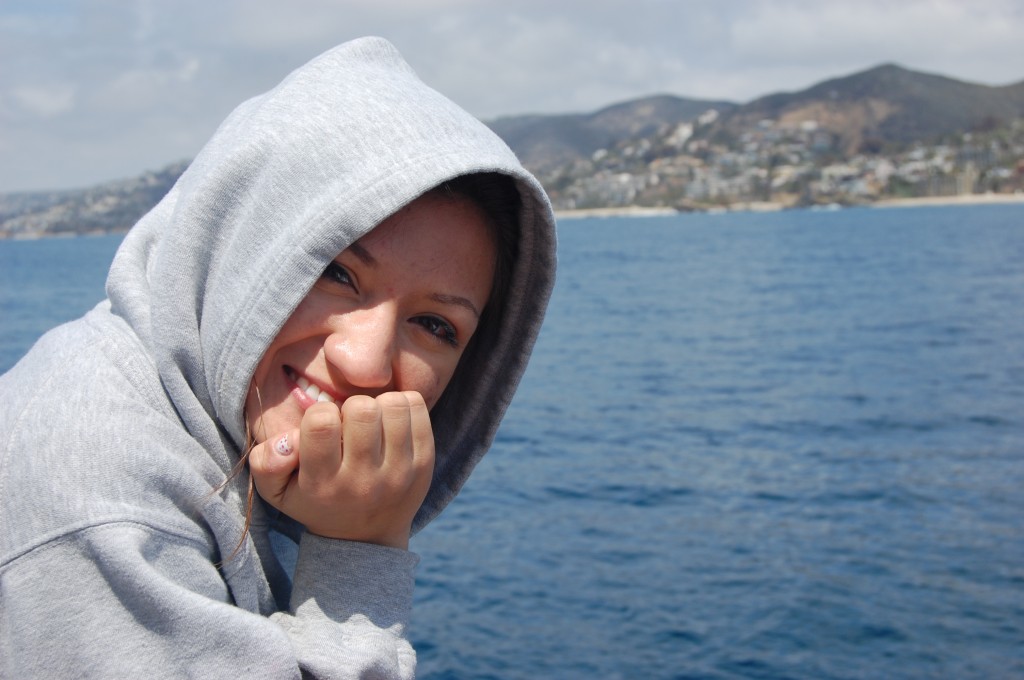 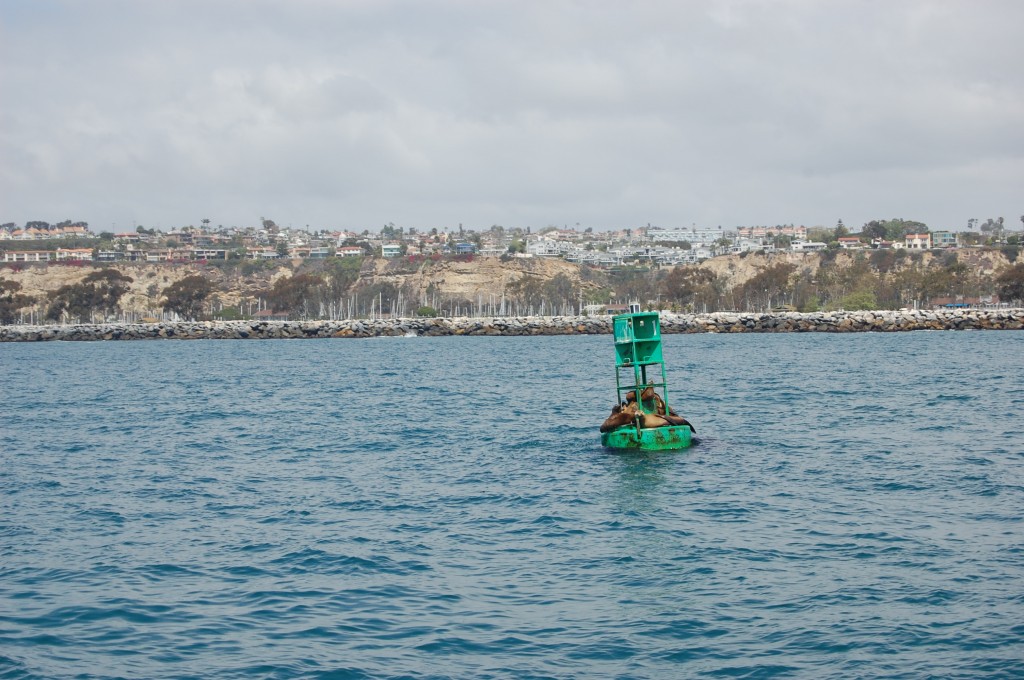 Then — about 40 minutes into the trip (and we were flying!), our captain spotted a Gray whale with her baby! He narrated where the Gray would probably pop up (“at 2:00,” he said, which — how fortuitous! — was right where we were standing). And he told us what to look for while he explained the Gray’s migratory and feeding habits. Then — there she was! We saw her spout, and her small dive back in, and her “flukes”: 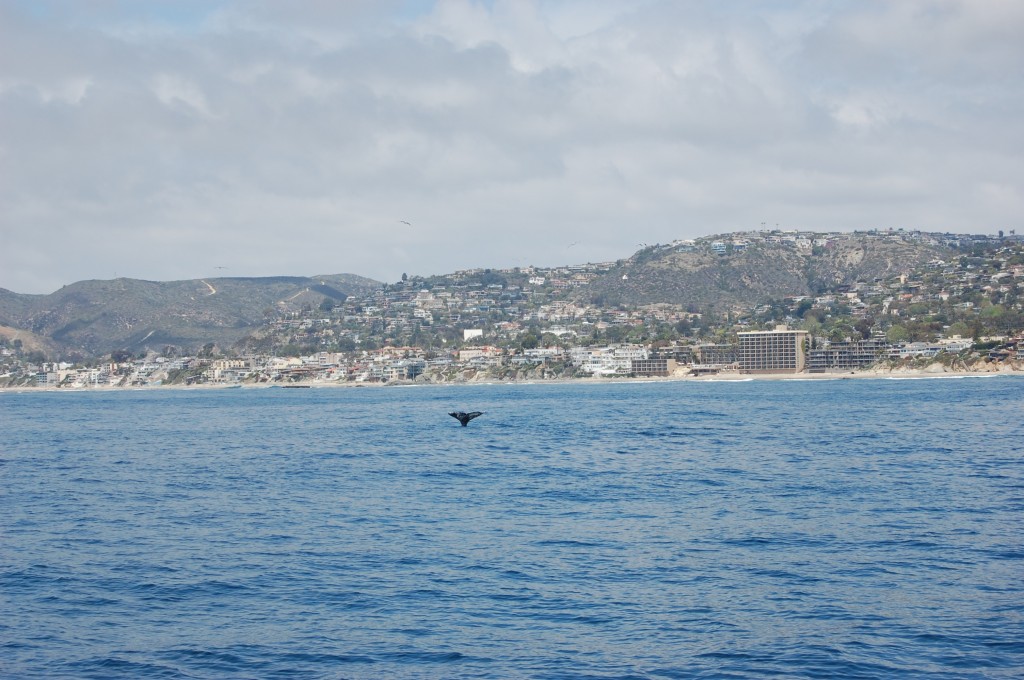 Her baby would follow each time she’d pop up. We stayed here for about 20 minutes while the captain narrated more info. He knew there were about four minutes between each time she’d come up, so he helped us time our pictures perfectly. It was exciting to see.

Then the captain heard from some ships up north that there was a pod of dolphins traveling, so he jetted us up there to see them.

The dolphins were amazing! At least a hundred of them, all around the ship, all leaping out of the water in clusters of twos and threes, and riding right alongside us: 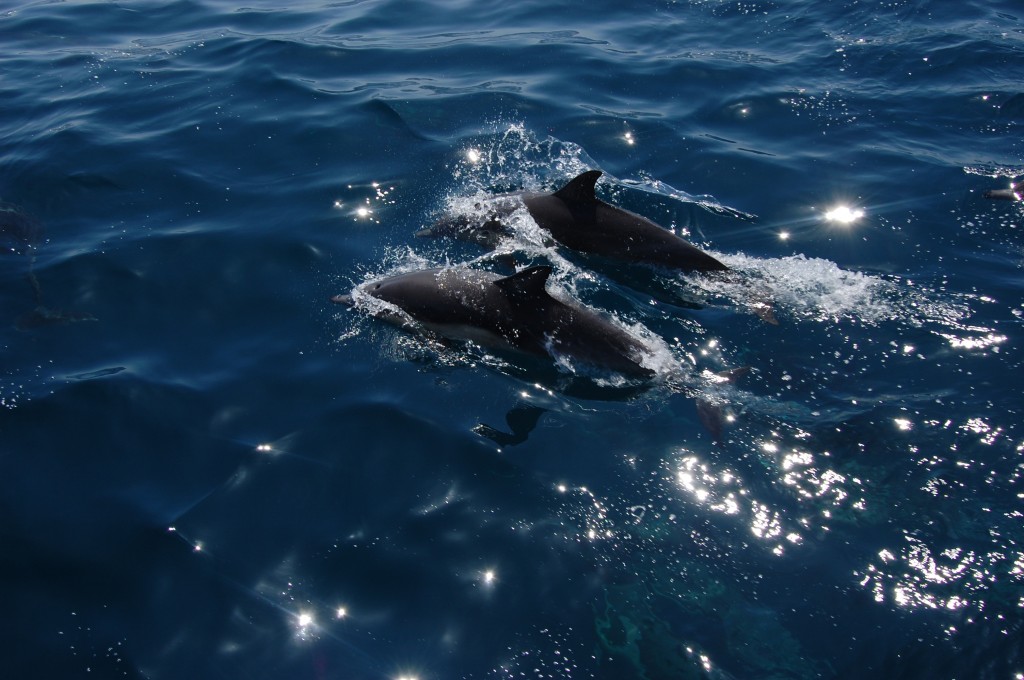 They were so beautiful: 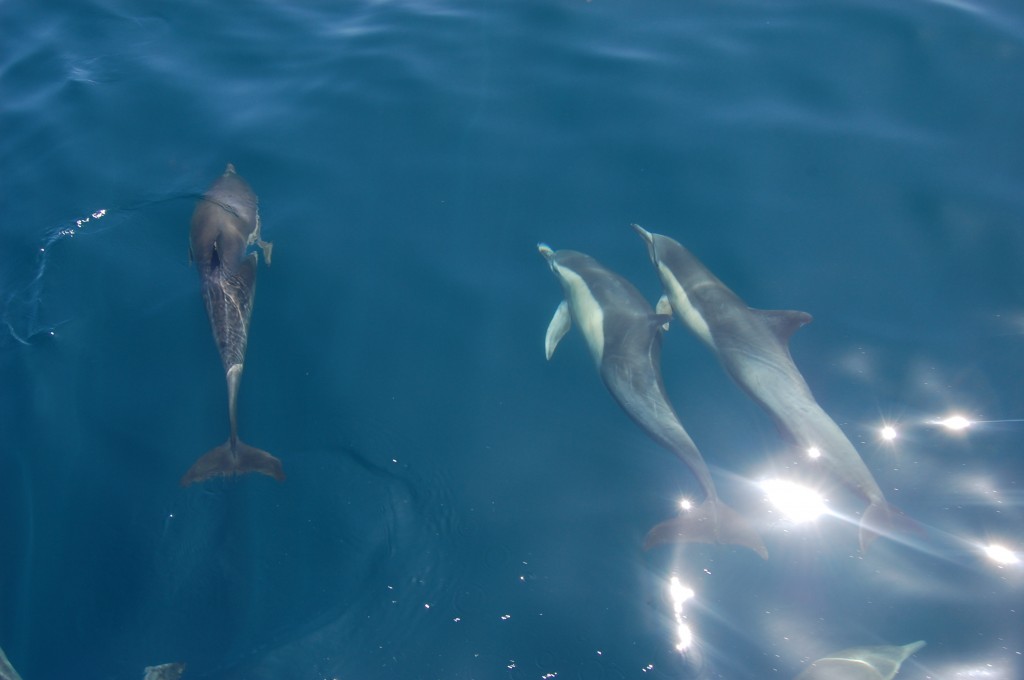 The kids were just in awe. I wish I took video of those hundred-and-something dolphins leaping all around the boat! 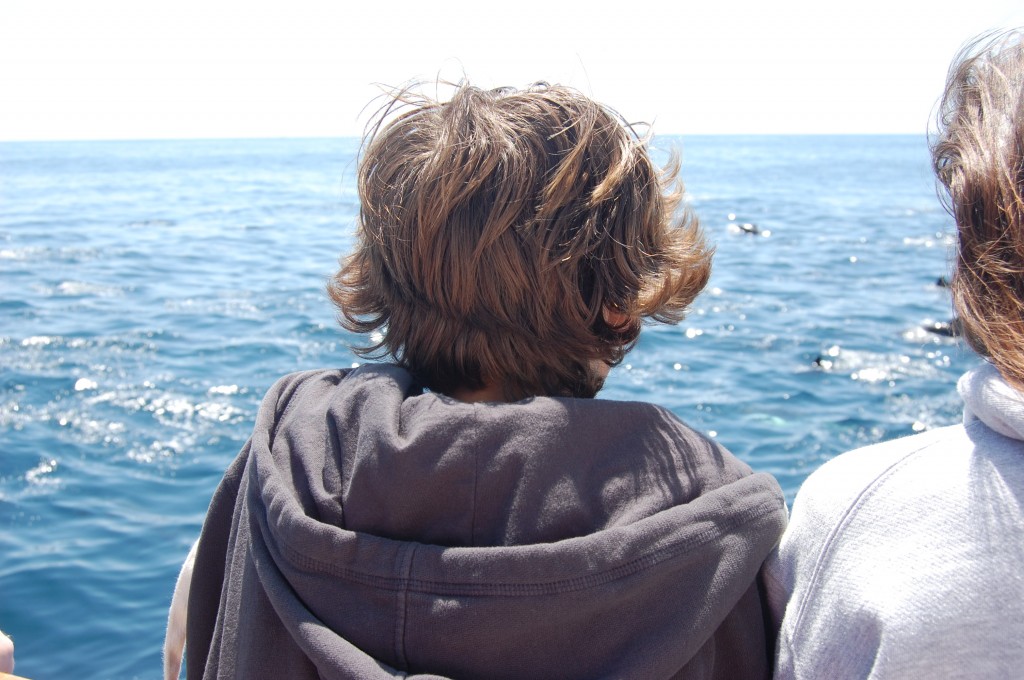 Nate also discovered food in the cabin downstairs — they make burgers and fries and breakfast burritos — so he went down to order a “snack” and studied the whale information they had while he was waiting for his burger. He really seemed to love learning about all of this: 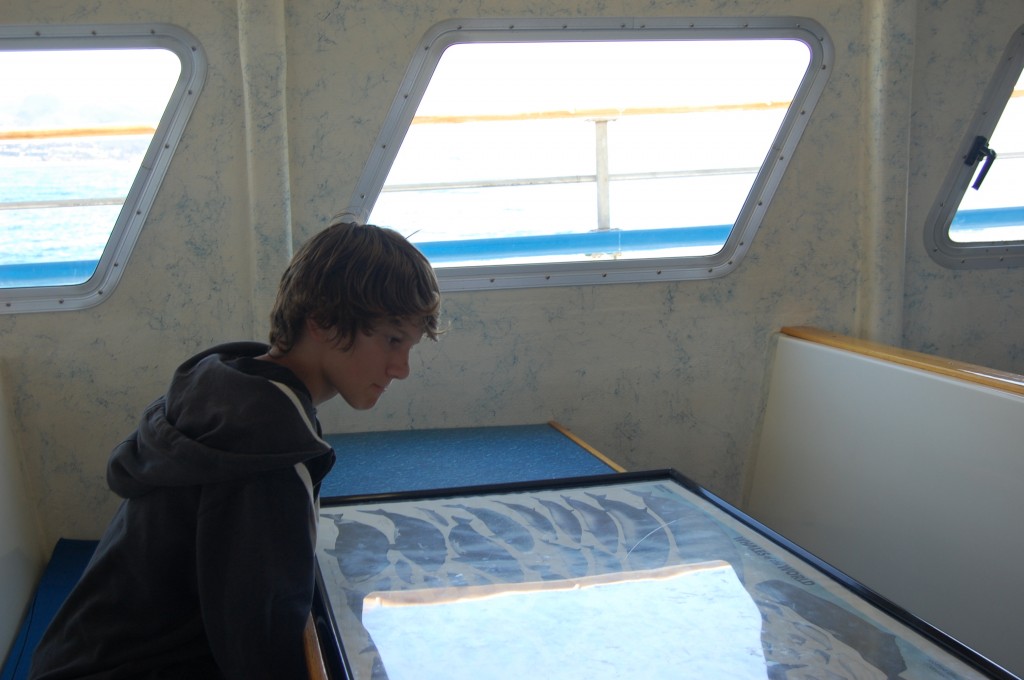 The two hours flew by, and next thing we knew, we were heading back to the harbor. The ride back was fun and relaxing as we looked at all the sailboats, paddle-boarders, workboats and more that make up the harbor and ocean area: 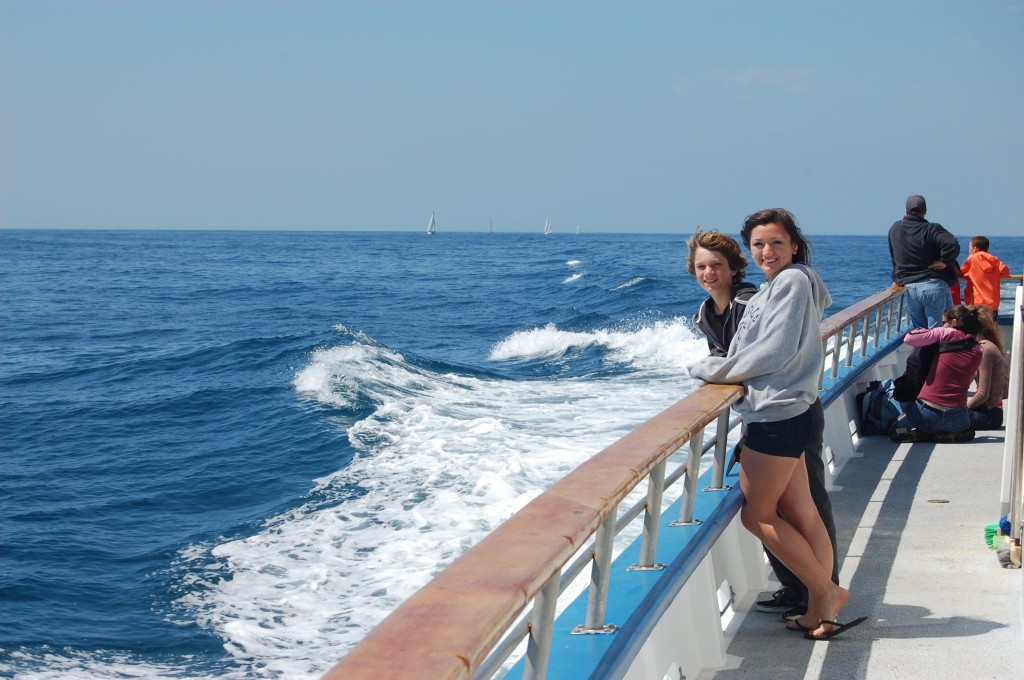 What a terrific day!

Here’s the writeup I did for the Things To Do in Orange County blog, which has a lot more tips and details: Whale Watching with Dana Wharf Sportfishing.

And here’s a link directly to Dana Wharf Sportfishing, if you want to go on your own adventure! : www.danawharf.com.

7 thoughts on “A Whale-Watching Adventure”