SO HAPPY that Mad Men is back on.

I know a lot of other women who are happy about it, too, but for another reason. …

The other night, Superman was telling me about a female friend of his at work who announced, after seeing the third episode of Mad Men: “That’s it! I’m leaving my husband for Don Draper!” 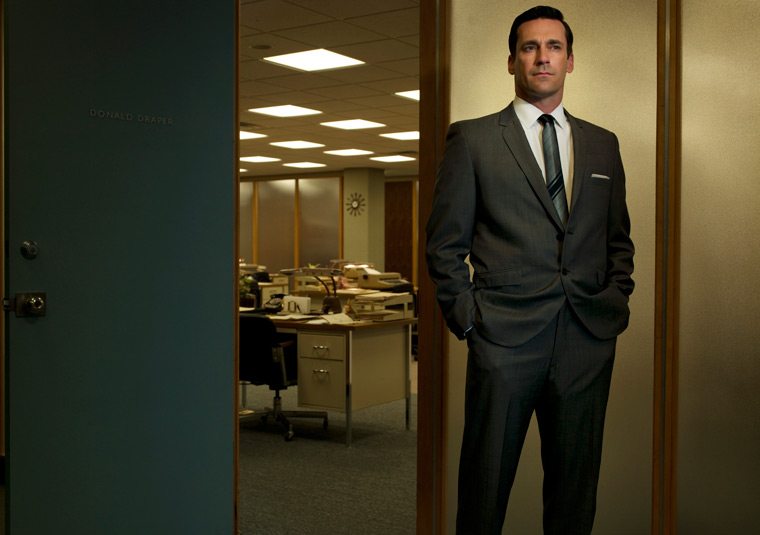 I laughed and told him I’d heard this sentiment once or twice myself. I’ve heard it on many of the blogs, often on Twitter, and several times with my own divas over at popculturedivas.

Don Draper — clearly — is a heartthrob.

Most of the women who say this are, I believe, responding to Jon Hamm’s good looks, not Don Draper’s character. Because Draper on Mad Men is, without a doubt, morally ambiguous. Most of the time, he’s being selfish and arrogant while looking dapper in his one-button suits and tapered slacks. And most of the time he’s cutting a woman off (emotionally, literally) while cutting her that look he does from under his eyebrows. He throws her that grin, but in the next scene he’s being a jerk.

So I’m assuming (hoping) that the women who want to “leave their husbands for Don Draper” are simply responding to his tall-dark-and-handsomeness, not his weird alpha-male-selfishness.

But here’s the thing — even on looks alone, Don Draper just doesn’t do it for me. I hear other women swoon about how gorgeous Jon Hamm is, and I think, really? Am I missing something? I mean, he’s nice looking and all, but he wouldn’t make me look twice if I saw him in a church parking lot.

But this certainly wouldn’t be the first time I feel out of step with popular culture — that everyone else in the country is in love with a book/character/movie/storyline and I’m just standing there, my hands at my sides, thinking … really?

For some reason, it seems particularly strange when it has to do with looks. Because looks seem like such an obvious, cut-and-dry thing. But clearly they aren’t. Clearly they have to do with some kind of “chemistry” even though you’re looking at a screen — I guess “chemistry” can still come into play, even without face-to-face contact? Weird.

So how about you — What television or movie heartthrob have you felt out of step with?