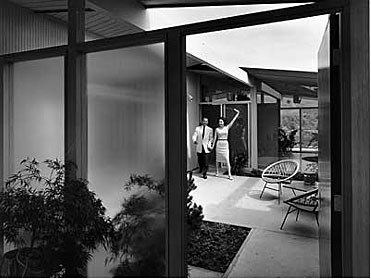 So awhile back, I said I was going to write in more detail about some of my favorite houses, since I’m quite smitten with homes for some reason.

One of the really cool ones I’ve had the pleasure of entering is Bookclub Lauran’s house, which is an original Eichler home.  It’s everything “midcentury” that Superman loves and everything “outdoors-in” that I love – we might have to try to move to an Eichler neighborhood someday. (That’s going to be us, in that picture above … once I, er,  lose 50 pounds and die my hair brown. …)

Joseph Eichler was a homebuilder in the 1950s and 1960s. He was not a designer, but a builder (much like William Lyon of today), but was the first of his kind, creating entire tracts of homes in a new industry called “merchant building” to meet the housing rush brought on by postwar need.

Eichler built throughout the country, but focused most of his communities in California, where he built more than 11,000 homes, both in Northern California (San Francisco, Marin County, Palo Alto, Sunnyvale, etc.) and in Southern California (Orange, Thousand Oaks, and Granada Hills).

The designs focused on a new “California modernist” style – tons of glass, lots of “look-through” views, center atriums, low beams, skylights, clean design, and a blending of inside and outside. The later designs had atriums, where rooms were lined, “train car” style, into a “U,” so each room had a view to the back yard and/or to the atrium in the center of the “U.” The atrium typically featured a Zen-style “clean” garden. Back yards typically featured patios and pools. It was all so very “midcentury California” — the kind of place you imagine halter-topped women lounging with their white-rimmed sunglasses. Here are some brochure pictures about them from that era: 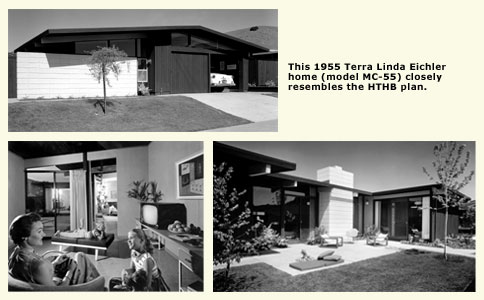 Although the designs didn’t sell well at the time (perhaps a little too avant guard for the returning soldiers, who were craving traditional homes as they returned), they managed to remain very modern-looking throughout the decades. And now they have a whole new allure — one that comes from looking distinctively midcentury modern. All the tell-tale signs are there – especially those walls of glass. And the best part is that entirely-intact neighborhoods remain.

Lauran lives in one of the remaining Eichler neighborhoods in Orange, Fairhaven, which runs primarily along Woodland and extends out on a couple of side streets. Driving through the neighborhood is truly like driving through another era. Here’s her street (now don’t you half expect a Studebaker to be parked out front there?): 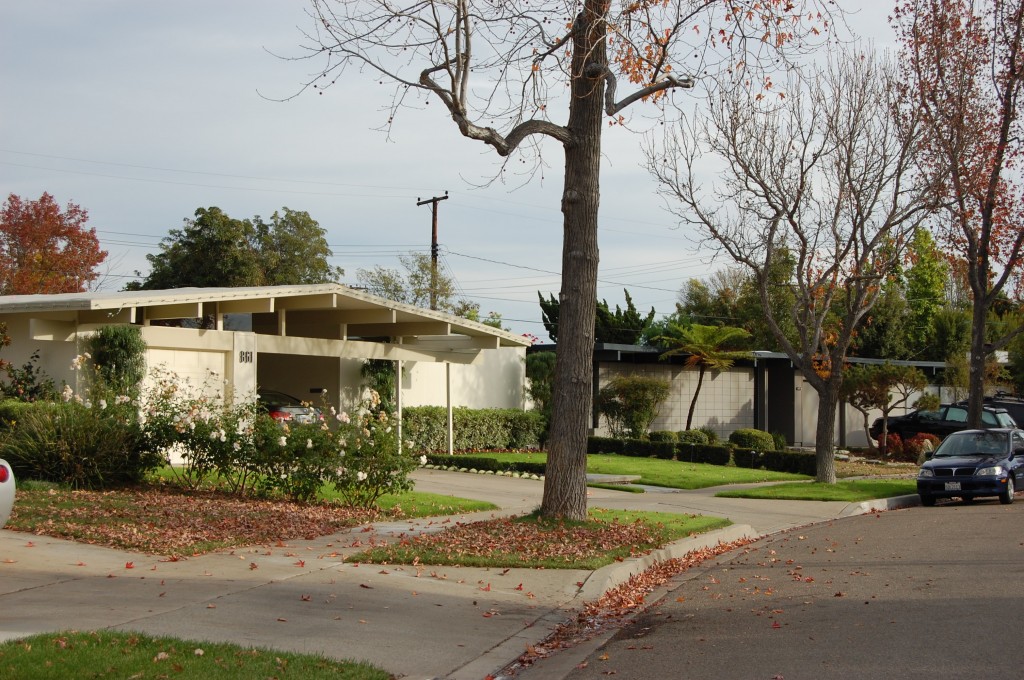 Lauran’s house features the classic atrium, so you knock on the front door, but when you step through it, you’re still outside, walking through an open-air atrium. Here’s a picture looking through her front door (I should have had Lauran and Mark pose like the couple in the top photo). Anyway, look at those open-air beams! Just lovely: 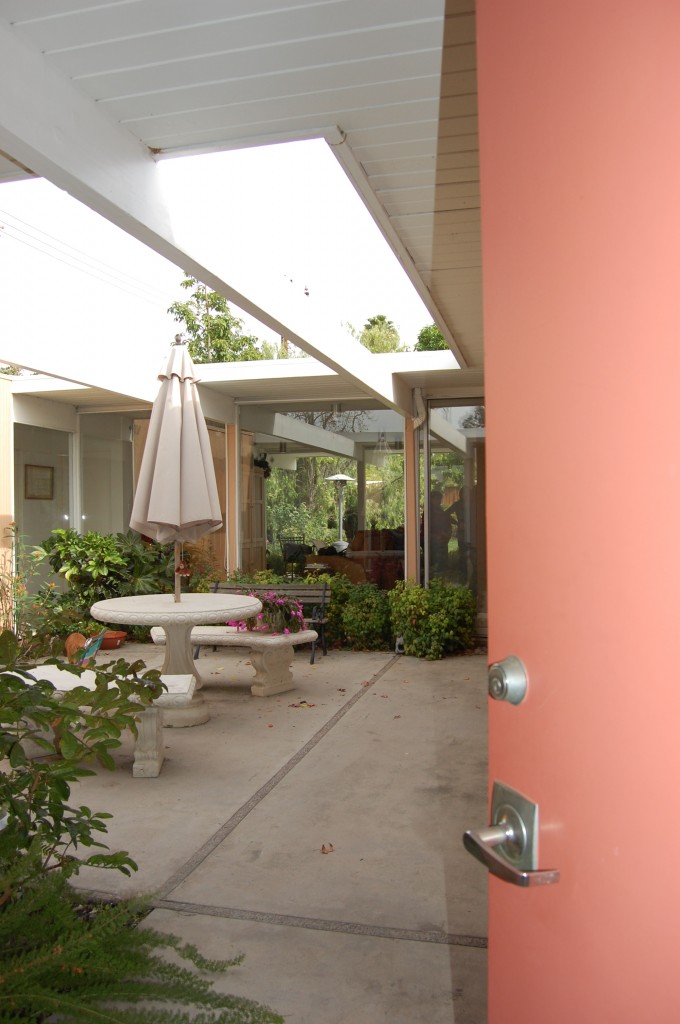 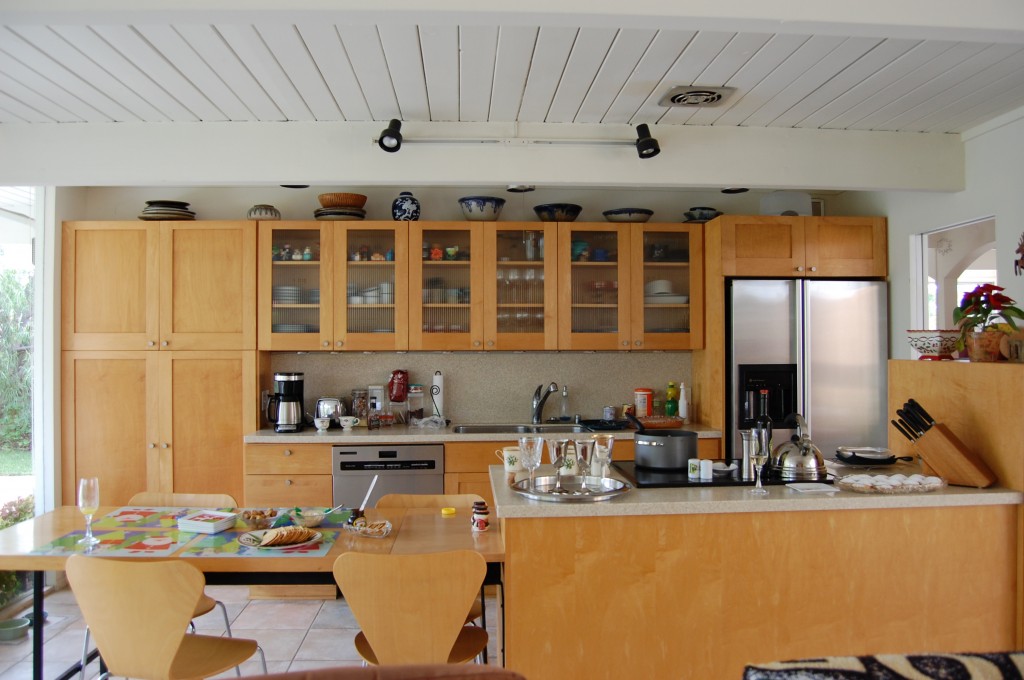 Here’s part of the hallway, to show how the atrium lets the “outdoors in” all throughout the home. LOVE IT: 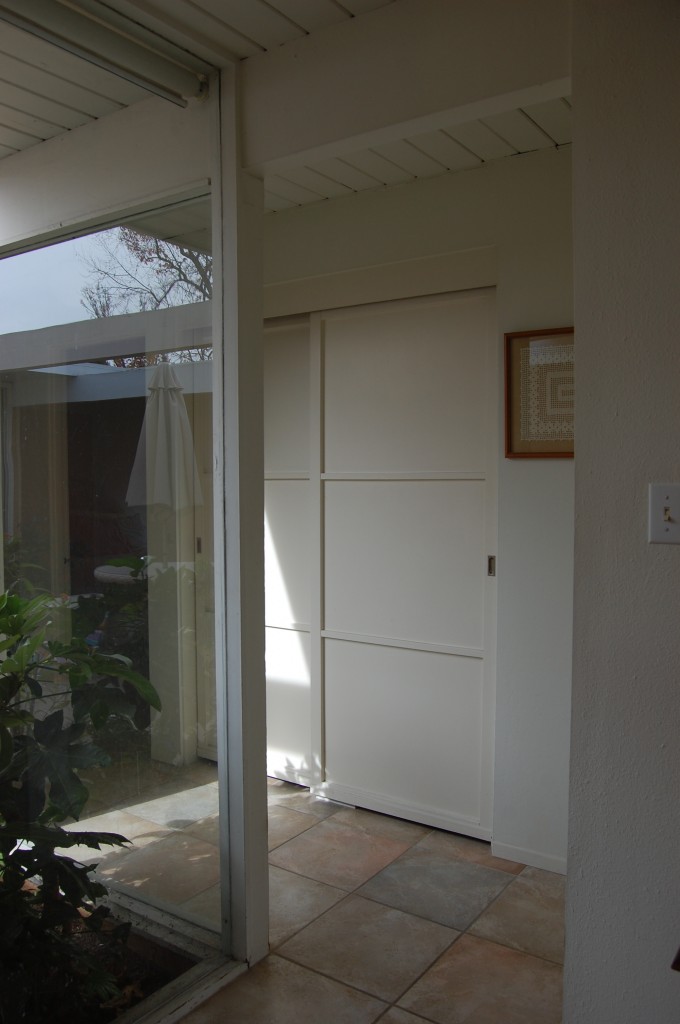 Here’s her living room, which she had decorated for our Christmas brunch with adorable snowflakes hanging from that low-beamed ceiling: 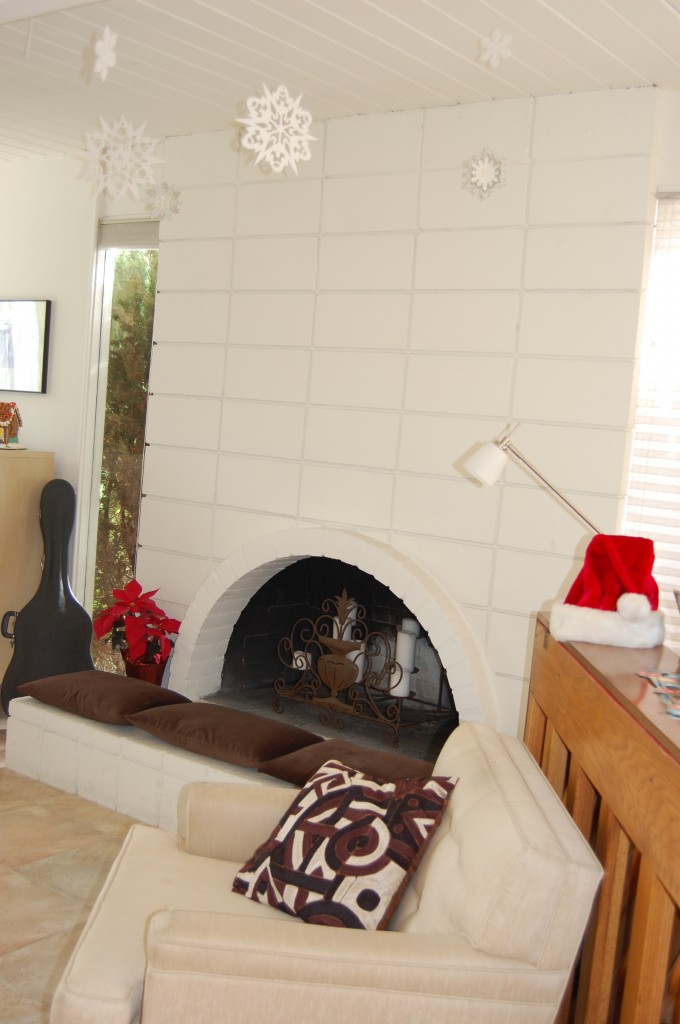 Isn’t that the most beautiful design?

It seems like the Eichler concept is being noticed all over lately. Eichler homes were even featured in the “Meet the Volkswagen” TV campaign recently.

And one of my favorite bloggers, Shea Rosemeyer, came all the way from Australia for a visit and had on her list that she wanted to see an Eichler home! (Too bad I didn’t read it ahead of time or I could have introduced her to Lauran!) Apparently, she managed to swing a few tours in the Orange County tract, and here’s her blog post about it: Actually, Buy Me  a Pink Flamingo.

So what do you think? Have you ever seen one of these neighborhoods? Do you have a neighborhood near you that simply whispers another era?

For more on me and Superman running around to look at MCM architecture, visit my post on our Palm Springs weekend called “If You Love Mid-Century Modern…”.

16 thoughts on “Eichler Homes: Loveliness in Walls of Glass”