Okay, my first official review came in from one of the top trade magazines! (The trades include Publisher’s Weekly, Kirkus, Booklist, and Library Journal. And, in romancelandia, Romantic Times as well.)

I actually stumbled across it Saturday night (even though it was dated Monday morning). I was working on the weekend, setting up a promo post for my blog, and when I went to get my Goodreads link, I saw that I had an uptick of followers on Goodreads all on the same day, May 1, which was last Thursday, and since I knew I hadn’t posted anything on that day, I figured there must have been a review of some sort out on the Interwebzz.

I Googled my book and, sure enough, a Publisher’s Weekly post came up! I about had a heart attack! (Because the way my mind works is this: Why didn’t anyone tell me PW reviewed me??? It must be because it was a bad review… omg, omg, they must hate me….)

Anyway, when I finally got the courage to open it, I literally could not read it! My eyes kept going to the left because I was so afraid to see it! It was ridiculous. I almost called Superman over to read it for me.

Finally, I got myself to read the whole thing!

Whew! It wasn’t bad. It wasn’t exactly glowing, but PW tends to take that tone, so I’m good.

Readers don’t read these much (except sometimes on Amazon book pages under “Reviews”), but booksellers, librarians and apparently movie-makers do, so they’re heavy on plot description, while reserving the last line or two to say something (hopefully nice, but not always) about your writing.

Here’s the review from Publisher’s Weekly: 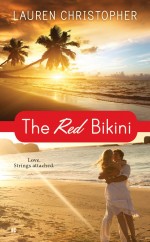 The easy charm of fictional Sandy Cove, Calif. sets the scene for a sweet romance between divorced mother Giselle McCabe and international surfing star Fin Hensen. Giselle and her five-year-old, Coco, are visiting Giselle’s sister, Lia, in Sandy Cove. Giselle plans to photograph a neighbor’s surf camp in exchange for surfing lessons for Coco. Shortly after meeting, Fin and Giselle arrange to be each other’s companions for two difficult occasions: Giselle must attend her former father-in-law’s funeral, where she expects to see her ex and his new lover, and Fin wants a “Donna Reed” type to improve his image at an important sponsor event. Buoyed by complementary needs for stability and appreciation, Giselle and Fin face the obstacles of their age differences, different lifestyles, and opposition from Giselle’s ex. Christopher’s writing is crisp and her characters are strong, and readers will look forward to the next installments in the trilogy. Agent: Jill Marsal, Marsal Lyon Literary Agency. (July)

So that’s it! I’ve officially lived through my first industry review. Publishing books ain’t for sissies, that’s for sure…. I might start breathing again by the end of July.

One thought on “My First Industry Review (Also Entitled: The Time I Stopped Breathing for a Second)”