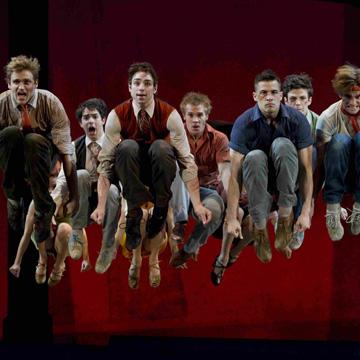 "The Jets" perform in West Side Story/ photo by Joan Marcus

Last weekend, Rene and I were graciously invited by my friend Debbie and her teenage daughter (and another friend of Debbie’s whom I know from the book club) to join them at the Segerstrom Center in Costa Mesa to see West Side Story.

We had a great time — we had lunch at Boudin Sourdough Bakery and then walked across the bridge to the show. (No, we didn’t snap-walk like the Jets … but it was tempting. …)

And the show? It was terrific.

Debbie and her daughter, and Rene and I, have all done this before — we used to scout out local musicals to bring the girls (we used to go to an old dinner theater that used to perform here in OC, since the girls were about 6 or 7). We used to let them sort of dress up and take them out to eat and then enjoy the show. (They thought they were very fancy, getting to order Shirley Temples and desserts with chocolate drizzle.)

Now, Debbie’s family has season tickets to Orange County’s Segerstrom Center, but the whole family wasn’t able to make this performance, so Rene and I got to be guests!

Rene was especially interested to see this production now, since she saw the movie version of West Side Story last year in her freshman English class after reading Romeo and Juliet. The class was asked to compare and contrast the stories, and find the references. (Can you?) So, familiar with the story, she was happy to see it performed in yet another way.

And the Performing Arts Center, as always, did a fabulous job. Apparently, the revival of West Side Story in New York decided to take a twist and let the Puerto Rican characters actually speak Spanish (instead of speaking English with a Puerto Rican accent, which … ya know, isn’t very realistic), and Orange County adopted the same change. I loved the twist — the storyline and the songs were all familiar enough that when they did lines in Spanish, you still knew what they were saying. (“I Feel Pretty” was beautiful with alternating Spanish lines.)

And the songs. … Gosh, the songs were all so familiar and iconic — “I Feel Pretty,” of course, as well as “Maria,” “Tonight,” “America,” “Somewhere” — even if you’ve never seen this story, you probably know the songs. I’ve been singing them in my head all week. …

Do you get a chance to see live performances where you live? I think it’s so fun to bring kids — there’s a magic to a stage performance that I think stays with children for a long time.

2 thoughts on “The Magic of a Stage Performance”