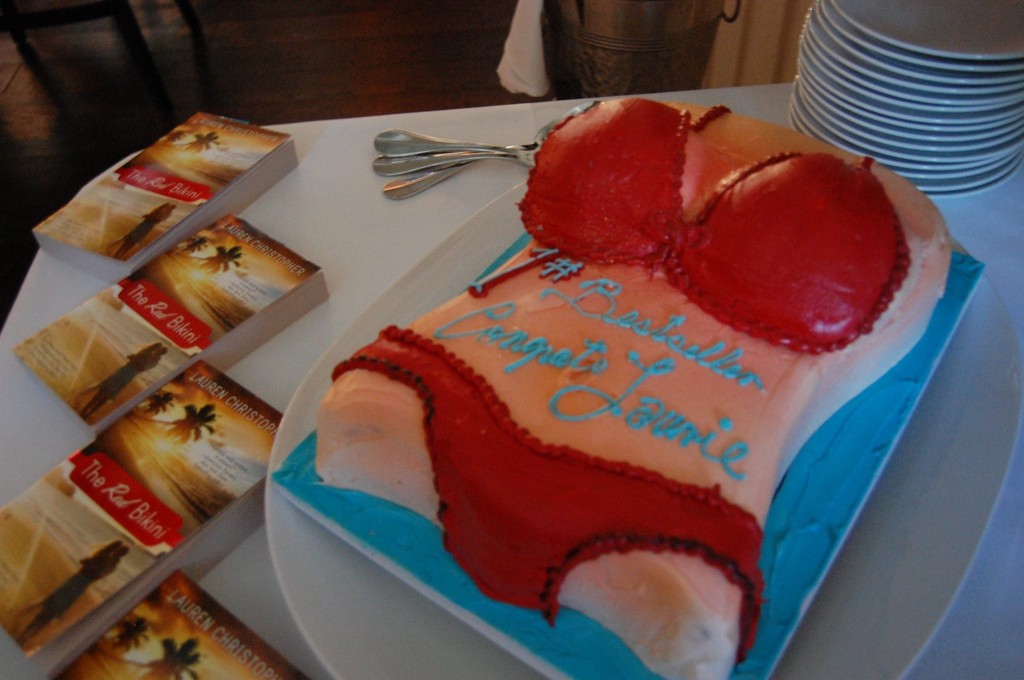 So — holy cow, my friends surprised me with a RED BIKINI surprise launch party shortly after the book was launched! And I was truly surprised!

It was thrown by my friend Barbara, from the book club. Barbara and I actually go way back – we went to high school together, she a year younger than me – but we reconnected in our mid-20s because we kept going to the same parties of a mutual friend, and we decided to start a book club together. Over the 15 years of the book club, we’ve become better and better friends. Barbara actually went to my first Romance Writers of America (RWA) meeting with me when I decided I wanted to try my hand at writing romance novels in about 2006. (Even though she has no interest in RWA herself!) She’s always been the most supportive and encouraging friend.

So she planned it and then sort of had to involve my husband when it came time to the details. Now I say this all love and respect, but I use the words “had to” because my sweet hubby is THE WORST at keeping surprises. … He will buy Christmas presents for me or the kids and then immediately start saying, “Oh my God, I bought you the coolest present! Do you want to know what it is?” When we say no, we can wait for the big day, he looks aghast. And then it becomes apparent that HE wants to TELL what it is! He bursts with joy every day about the present and gives “hints” even when we don’t ask for them.

So this is the guy who had to keep the surprise party secret.

Oddly, he did an amazing job. AND he came up with a ruse that was so elaborate I went for it hook, line and sinker. He told me he won a raffle at his work, after buying a raffle ticket from a coworker he didn’t know very well (but liked), along with several other coworkers he didn’t know very well, and that we won a dinner at this “seafood place,” where we needed to be at 7 p.m.

The reason this worked is that: (1) I didn’t want to be late because it was for his work; (2) I couldn’t cancel or change the location because it was a raffle, with a set time and location; (3) I didn’t wonder why it was so far away; (4) I didn’t wonder why he chose a restaurant we’d never heard of or talked about; (5) I didn’t wonder why he was sort of nervous; (6) it wasn’t anyone I knew at his work, so I couldn’t call ahead of time and ask them about it; (7) I was dressed appropriately and had my makeup on (even though it was a day off for me) because I wouldn’t want to embarrass him, etc. So it worked! Even though I asked him a million questions (“Is it a buffet?” “Will we be sitting by ourselves or with other people?” “Did we win the whole dinner?” “Will anyone be there I know, like Debbie?” etc.), and even though he was sweating and tugging at his collar, I still had no idea. …

Anyway, we walked in, and were being directed toward the cocktail area, and I looked up and saw my friend Carrie in a bright yellow dress. (Carrie! What was Carrie doing here?) But I still didn’t figure it out. Instead, I stared at Carrie for an unreasonably long time (not looking past her), trying to figure out how my book-club friend in south county would know someone at my husband’s work in north county. As I walked toward the back of the restaurant, I was thinking I’d go over and say hi — and then FINALLY my eyes slid to the person she was talking to, who was another of my book-club friends, Debbie D. (Debbie! What is Debbie doing here with Carrie?) It STILL didn’t dawn on me immediately, but when I saw a third book-club friend (yeah, it takes me awhile), I finally put the pieces together and realized that the reason they didn’t tell me they were getting together here (!) was that they were here to surprise me. …. Oooohhhhhh!!!! Then I laughed and walked up to greet everyone!

More about the party and the “surprise guests” in the next post here!

3 thoughts on “‘The Red Bikini’ Surprise Launch Party: How it Went Down …”