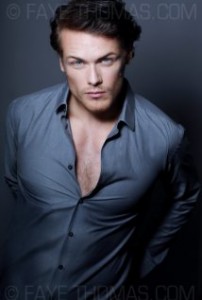 Sam Heughan was chosen to play Jamie Fraser in 2014

UPDATE, August 2014: This post was originally written in May 2009, nearly five years before Diana Gabaldon had real plans to bring Outlander to the small screen, so this was all simply fun speculation about who should play Jamie Fraser if a movie were ever made. In reality, now, of course, the book is being brought to STARZ with the verra sexy Sam Heughan playing Jamie. (And very well, at that!) But if you want to hear our own musings years ago (the comments are really fun!), read on:

One of the fun things to do when you finish a favorite book is to try to figure out who should play the parts of all the lead characters.

“Casting” came up again for me this week on Twitter. First, we were discussing an actual movie and who would play the roles, but then – since I just finished reading Outlander – I brought up Claire and Jamie. (No, people, calm down — I don’t know of any real plans to be a movie — just having fun thinking of who I would cast if it were.)

I realize I’m not the only one who plays the “who would play Jamie?” game, but Jamie would be a crucial decision, wouldn’t he? He’s named seemingly everywhere as one of the most popular romance heroes of all time, so his role would have to be perfectly cast to appease millions of fans.

I asked my Twitter friends who they thought should play him, and here are some of the votes I got:

What about you? Who do you think should play Jamie? Read below our dozens of comments and check out all the cool links people left — then weigh in yourself! We’d love to hear your thoughts!

39 thoughts on “Who Would You Cast as Jamie in ‘Outlander’?”