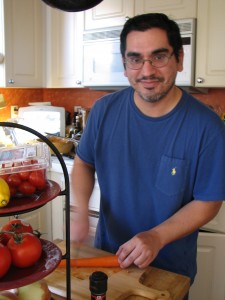 This is Dave. He’s Superman’s youngest brother. He comes into my kitchen like this from time to time and shows me a thing or two about finding my way around.

My culinary skills can be described as thus: late-blooming, learned from television, rather routine but with brief flashes of delicious.

I can make a normal dinner for my family that my kids seem to think is edible, but I make the same things over and over, and did for a good seven years when I was a SAHM. My kids had almost memorized my rotation: spaghetti, potato soup, beef au jour, tuna melts, ravioli with chopped tomatoes and basil, and mastociolli. Those were my basics.

Now that I’m a working gal again, Superman has taken on the cooking. Mostly because he’s home before I am, so it makes more sense to have him start things simmering. Superman is actually a very good cook. His salsa is brilliant. And he also makes us pancakes, breakfast burritos on Sundays, the most amazing enchiladas ev-ah that he learned from his dad, and hamburgers that could be served in restaurants. He also grills. And he makes a delicious Spanish soup (at least that’s what I call it, because it has lots of cilantro, some kind of hot pepper, chicken with a good spicy finish, and is topped with cheese/tortilla strips/onions).

Anyway, that’s how we cook. We both have our “routine” dinner fare, plus we have our brief flashes of gourmet.

So Dave, Superman’s brother, visits from time to time from Te-jas and gets in my kitchen and makes things smell amazing. He is a GREAT cook. And my kids appreciate his talents – they’re pretty open and adventurous eaters – so he likes cooking for them. He makes an amazing chicken-and-smoked-sausage gumbo that we request over and over again (pretty much every time he comes out). He made an excellent Americanized goulash last time he was here, which he served with braised carrots and pierogis. And he makes a delicious French chicken dish called poulet chasseur that he renamed “Poulet Nene” after my daughter Rene (who loves it). He’s even got my kids in the kitchen, learning to pull chicken or chop onions.

Dave will be here when the Super Bowl rolls around, and I’m already clearing the countertops for a big pot of gumbo. …

11 thoughts on “A Personal Chef Inside My Kitchen”